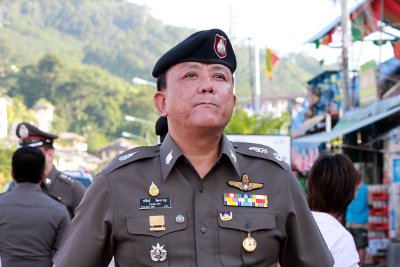 Speaking to the Phuket Gazette this morning, Phuket Provincial Police Deputy Commander Chalit Kaewyarat said, “I do not know where the list of transfers printed in the newspaper is from, and I have no idea whether or not Maj Gen Chonasit will be transferred.

“I don’t even know if I will be promoted to commander of the Phang Nga Provincial Police, which was also published on the list.

“The list of transfers has yet to be approved by the Office of the Police Commission. It seems this news has come out of nowhere. Right now, it’s just a rumor,” he said.

However, Col Chalit confirmed that news of any transfers of senior police either into or out of Phuket was expected to be announced tomorrow.

“The Office of the Police Commission will issue its order of transfers tomorrow, August 29. Any transfers issued in that order will be effective on October 1,” Col Chalit explained.