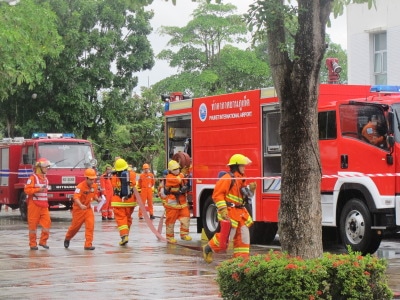 PHUKET: Officers from a variety police stations across the island yesterday took part in a multi-agency exercise to counter the prospect of a car bomb being detected and another bomb actually detonating at Phuket International Airport.

Police from Phuket City, Tah Chat Chai and Thalang police stations were joined by Thalang Hospital staff to take part in the exercise, which was overseen by a team of Phuket Provincial Police officers and representatives from other organizations.

“This is a partial emergency exercise in which participants work together to deal with two scenarios involving bomb threats at the airport,” explained Mr Suthep.

In the first scenario, an airport security officer discovers a suspicious object in a car and requests Explosive Ordnance Disposal (EOD) officers examine the object.

Subsequent EOD investigation reveals the object to be a possible Remote Controlled Improvised Explosive Device (RCIED). The bomb disposal officer suspects that the device could be initiated by mobile phone and so he calls for specialist Electronic Counter Measures (ECM) to be deployed.

Once the EOD ECM vehicle arrives on scene and switches on its jamming equipment, the EOD officer deems it safe to approach the vehicle and deal with the suspect device.

After carefully removing the IED from the car, the EOD officer places it in a vehicle-mounted blast container. From the airport the device is taken by road to a designated safe-detonation area near Nai Yang Beach.

“In the second scenario, a criminal places a bomb at the front of the building and it explodes,” said Mr Suthep.

During the second exercise yesterday, firefighters responded to and extinguished the fire.

However, two people were “injured” in the blast and medical assistance was requested from Thalang Hospital staff to provide initial treatment and deliver the bomb victims to hospital, as planned in the simulation.