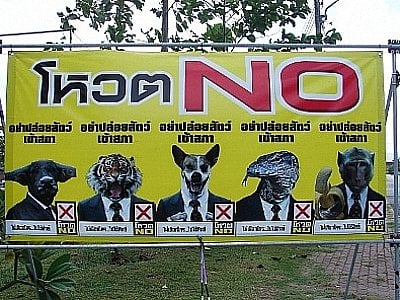 PHUKET: Phuket Provincial Election Commission Director Kitipong Thiengkunakrit yesterday confirmed to the Phuket Gazette that the billboards urging people to vote “none of the above” in the July 3 elections will stay until he receives from Bangkok an official order to remove them.

The Election Commission of Thailand on Thursday ruled that similar billboards in Bangkok were in breach of election law and were to be pulled down immediately.

However, Dr Kitipong said yesterday that, “I do not have the authority by myself to determine whether or not the posters contradict election law. I must wait until I receive an official order from the Election Commission of Thailand before proceeding with any action.”

Don Limnunthaphisit, one of the leaders of the “Phuket Vote No” group, this afternoon told the Gazette that to avoid the problem the posters will be erected in “private areas” only.

“The posters are not allowed to be in public areas, so right now we are posting them in private areas only instead,” he said.

The posters will be attached to vehicles, posted at the front of private property and on billboards erected on private ground, he said.

“I urge everyone to vote on July 3, but to vote ‘no’ will help reform politics [in Thailand],” he said.

The group will stage a parade from Queen Sirikit Park on Thalang Road, in Old Phuket Town, to Saphan Hin today (June 11) to continue their campaign, Mr Don said.

The parade will start at 2pm.