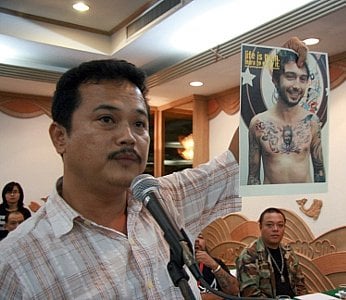 PHUKET: More than 100 tattoo business operators in Phuket were called to a meeting in Karon yesterday afternoon where they were asked to “cooperate” in the latest nationwide “cultural appropriateness” clampdown on Buddhist tattoos.

The meeting followed the Ministry of Culture earlier this week announcing it would impose a ban on all religious tattoos.

The ensuing controversy and heated human rights debates, however, resulted in the Culture Ministry scaling back its initial blanket ban on all religious symbols to focus specifically on Buddhist tattoos.

“Phuket will be the initial province [of focus for the campaign], and we will follow through in every other province,” Culture Minister Niphit Intharasombat declared last week.

“The need for these discussions arose from complaints being posted on the Culture Ministry website. The posts included pictures of foreigners with Buddhist tattoos in inappropriate places,” Culture Ministry Permanent Secretary Somchai Sianglai yesterday explained to the assembly at the Thavorn Palm Beach Hotel.

“The complaints come from concerned Buddhists from all over the country, including Phuket,” he added.

While there are no laws in Thailand expressly forbidding Buddhist tattoos, long-standing cultural practices prohibit the inappropriate use of Buddhist symbols in commercially specific contexts.

To fuel their campaign, the Ministry of Culture ordered a reprint of 10,000 manuals and asked all tattoo parlor operators to keep a copy in their shops to show to clients.

The Thai and English-language handbooks define which Buddhist symbols are ruled by the Culture Ministry as “inappropriate” for commercial use.

Copies of the books were distributed among tattoo business operators yesterday.

This is not the first time in Thailand the line between business and Buddha has been crossed.

Ladda Tangsupachai, director of the ministry’s Cultural Surveillance Center, added, “Since the tattoo business is a fairly new career for many, some patrons are not aware of the existing [commerce and cultural] regulations.”

Tattoo operators were well prepared for yesterday’s meeting. Many had met earlier and drawn up a list of compromises to present to officials.

“If the rules forbid us to do any Buddhist tattoos, it will effect our earnings. Besides, foreigners will get these tattoos abroad from artists who don’t really know the meaning of the symbols,” said Nontiwat Jantaraprasit owner of Quality Tattoo Phuket in Kata.

“It’s better that we [do it] so we can explain the appropriation. As Buddhists, we will never provide tattoos on inappropriate parts of the body, and we always explain the importance and meanings of the tattoos first,” he said.

“Those tattoos [seen on inappropriate parts of the body] were probably done overseas by an artist who does not understand the meanings,” Mr Nontiwat added.

The list of compromises stated the artists will apply Buddhist tattoos only on the upper parts of the body, they will not distort the image of the Buddha in a [visually] negative manner and they will explain the importance and meaning of Buddhist tattoos in Thailand before applying any such tattoos.

Secretary Somchai concluded the meeting by saying, “We will collect all the information and opinions and report to Phuket Governor Tri Augkaradacha and related officials.”

He added that results for the debates would take time as officials “do not intend to force the issue, but prefer cooperation”.

With an eye on the spread of infectious diseases, Public Health officials will be inspecting tattoo parlors throughout the country to ensure health standards are being adhered to.

“Vote No’ election billboards in Phuket to stay – for now