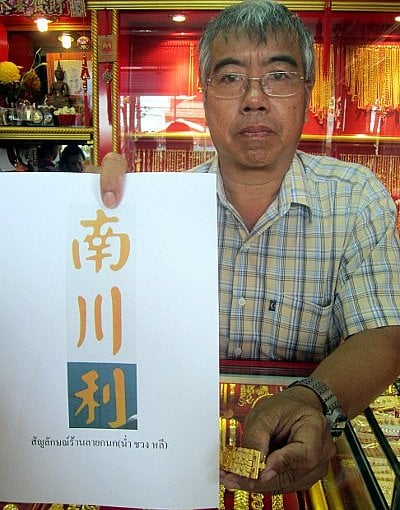 PHUKET: The owners of a Phuket Town gold shop robbed in broad daylight last Saturday have upped the reward to a maximum of 200,000 baht for information that leads to return of the stolen jewelry.

Jirasak and Chantana Tarnattanasombut on Wednesday said that those who recovered any stolen items would be given 30 per cent of its value as a reward.

The robber, dubbed “Ake” on the Phuket City Police arrest warrant, made off with gold jewelry with an estimated value of 6.4 million baht.

Mrs Chantana said she was behind the display counter in the shop with her 17-year-old daughter when the robber entered. CCTV footage shows the man wearing a Starbucks t-shirt, jeans, fake glasses and nose. (Click here to see our PGTV report including CCTV footage of the robbery).

“He came in and asked to see a necklace. As I was picking it up [from a display case behind the counter], he pulled out a gun. I heard a bang as he jumped over the counter. I thought he had fired his gun but could not see any damage. I knew the gun was fake,” Mrs Chantana said.

While the robber was taking gold jewelry from display cases, the Tarnattanasombut’s older daughter pressed an alarm switch in a rear room.

Mrs Chantana tried to activate the alarm behind the counter. Both switches did not work, Mrs Chantana said.

“My daughter picked up a gun from behind the counter but he saw it and wrestled it away from her. We got his fingerprint from my daughter’s shirt,” Mrs Chantana said.

“Our shop is uninsured and we are contacting the company that installed the alarm to see what action they will take regarding the inoperative system they installed,” Mr Jirasak told the Gazette.

Mr Jirasak showed the insignia that is engraved onto 90 per cent of his products and asked other gold shop owners to look for it on items sold to them.

“If you see this insignia on any gold items being sold to you, they originated from my shop. You can buy them [from whoever is selling them to you] and then inform me, I will buy them back.

“Please give me any information and CCTV footage you may have,” Mr Jirasak said.

“I really want this man arrested. He may do it again. We need your help,” he added.

“The robber did not have a southern accent. He spoke Thai, but I am not sure whether he is from the south or not. The police told me that they are searching for this man night and day,” Mrs Chantana added.

Steel barriers would now be installed separating the counter area from the rest of the shop but the new measure would be too little too late, Mr Jirawat said.

“Vote No’ election billboards in Phuket to stay – for now