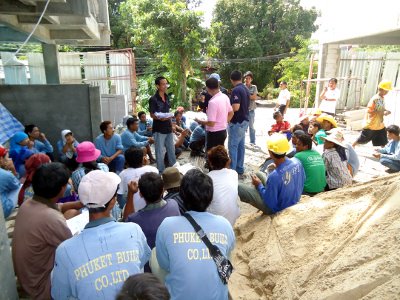 PHUKET: About 150 Labor Ministry officials and volunteers joined a seminar in Phuket Town yesterday to learn about the alien worker registration process for 2011.

The volunteers are expected to play a key role by informing employers who want to hire alien workers about the work permit application process.

Since the current registration period began on June 15, about 1,600 employers have requested to hire a total of 15,000 alien workers.

Most of the laborers needed in Phuket work in construction, fishing and other industries that have difficulty attracting Thais due to the low wages and difficult nature of the work, he added.

Thailand has a separate work permit system for low-wage laborers from Burma, Cambodia and Laos that requires them to have their nationality verified by their home country.

If all the paperwork is complete, illegal alien workers can become legal by leaving Thailand and re-entering the country at a border checkpoint, where the work permit will be issued.

Official estimates of the number of illegal alien workers and their dependents range as high as 200,000, a Senate panel meeting in Phuket was told last year.

However, the Phuket Statistical Office estimates the number to be closer to 100,000.

A nationwide effort to legalize more alien workers was launched in 2009 and was to end with a nationwide crackdown after the February 28, 2011 deadline.

However, lack of compliance and industry leaders voicing the need for low-cost workers led the Cabinet of former Prime Minister Abhisit Vejjajiva to declare an extension on April 26 this year.

The current grace period allows undocumented workers and their children aged 15 or younger to remain in Thailand for one more year while they complete the work permit process.

To make this possible, the PPEO set up a “one stop” alien worker registration center at the Phuket Red Cross Office on Rattanakosin 200 Pi Road.

An overwhelming majority of low-wage alien workers in Phuket are from Burma or lands controlled by the Burmese junta.

In addition to the high cost and the complexity of the paperwork involved in legalizing these workers, the fact that many are in fact stateless has been a major obstacle to the national verification process needed to obtain a work permit.

Many of the children collectively referred to as “Burmese” by officials were born in Phuket and are ethnic Mon or from other non-Burmese ethnic groups.

Many of the children speak fluent Thai and have never been to Burma.

In a press conference just before the national election last Sunday, Phuket Democrat MP Raywat Areerob said that as part of the Opposition he would work to ensure all of these children were sent back home.

Phuket’s Triathlon double bill is not for the faint hearted

Phuket to host regional seminar for the blind