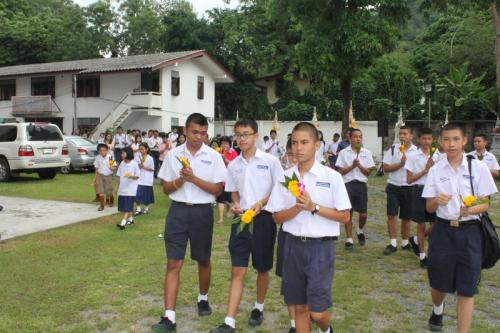 The public holiday commemorates three important events in the life of the Buddha: his birth, enlightenment and passing away. These events occur on the same day of the year in the Buddhist calendar: always on the full moon during the 6th lunar month, which usually falls in either May or early June.

Following the offering of alms there is a special sermon and blessing ceremony to honor the occasion, mass prayers and a candlelight procession.

The traditional circular candlelight procession will be held at every temple across Phuket starting at 7pm tonight.

An alcohol ban is in effect during the holiday. Bars and retail outlets across the nation have been asked by police to observe the Alcohol Control Act of 2008 by not selling alcoholic products.

“Bars, restaurants and other retailers across Phuket are required to refrain from selling alcohol from midnight Thursday night to sunrise Saturday morning as a complete ban on alcohol sales comes into effect for the Buddhist holy day Visakha Bucha on Friday,” Patong Police Deputy Superintendent Lt Col Akanit Danpitaksat confirmed to the Phuket Gazette.

Violators are subject to six months in prison, a 10,000 baht fine, or both.