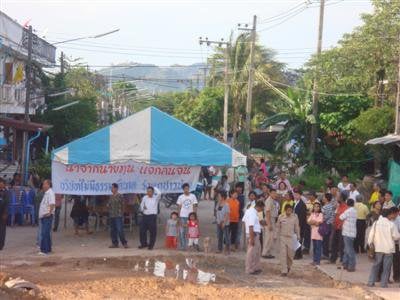 WICHIT, PHUKET: For the fifth time in three months, villagers living in Ketkaew Village near Phuket’s Panason City Project took to the streets in protest yesterday.

This time they claimed the housing complex, off Chao Fa East Road, was causing flooding in their village and polluting their water supply.

Using a large tent, the protesters blocked access to the 78-rai development on Soi Thep Anusorn.

They demanded the developers take action to improve the project’s drainage, which they said was inadequate and causing flooding.

“They’re trespassers, which is why we are going to chase them out soon. We’re not going to invest much to help them, but if there’s something small we can do then we will,” he said.

Some of those living on the disputed land claim to have been there for 10 years, but none have land title deeds.

The company has offered at least 20 families 20,000 baht each to vacate, but some have refused.

Other families are understood to have paid a deposit to the company that previously owned the land and still have a right to live there.

The company denies this, saying it is attempting to have these people evicted through the courts.

The land in question, about five rai, amounts to less than 10 percent of the total project area, Mr Jareonchai said.

Representing the protesters was a defiant Kasinee ‘Ee’ Sae-eu, President of the Ketkaew Village Association.

“It is not our fault, so we are not going to leave,” she said.

The company should accept all the responsibilities of the former project owner when it bought out the bankrupt firm 10 years ago, she said.

“They block our way, not letting us in or out. They try to force us to leave.”

“Now they have promised to take care of the drainage problem to make sure we can use the water, but I am not really sure if they are sincere,” she said.

However, the promise was enough to convince the protesters to take down their tent – at least for the time being.