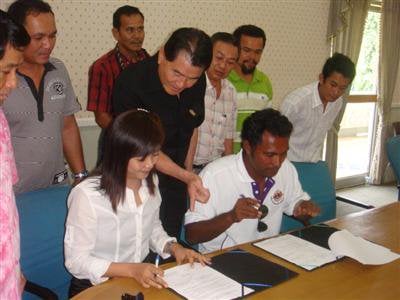 The event was witnessed by around 15 jet-ski operators.

Phuket Governor Wichai Phraisa-ngop was also present at the signing.

The deal will be a relief to Gov Wichai, who has been told by the Deputy Prime Minister to end the island’s infamous ‘jet-ski scam‘, in which tourists who rent out jet-skis are forced to pay out large amounts of cash in compensation for alleged ‘damages’ to the machines.

The island’s 219 legally registered jet-skis now have until November 15 to sign up to one of two insurance schemes:

Gov Wichai told the meeting, “I understand that we’re all just doing our jobs and trying to make money to survive, so from now on please just go and do your jobs honestly.”

“Only you can take care of this problem now,” he added.

Mr Anusorn complained that hotels had erected signs telling their customers not to rent jet-skis.

“Now that we’ve all agreed to get jet-ski insurance, we ask for understanding and for people to support and promote us again,” he said.

Over the years jet-skis have been a major source of complaint among tourists visiting Phuket.

A recent Gazette readers’ poll found that just over half of respondents wanted to see them banned completely.

Phuket jet-skis have also been involved in numerous offshore accidents over the years, several of which have resulted in deaths of foreign tourists.

A month apart in 2003 two foreign teenagers – one of them a 13-year-old German boy – died from injuries sustained during jet-ski accidents.

In 2004, then-governor Udomsak Usawarangkura set in motion a plan to phase out jet-skis over a seven year-period by refusing to issue any new jet-ski licenses.

However, that plan was effectively shelved in 2007, when his successor Niran Kalayanamit backed down to allow owners of registered jet-skis to replace old or inoperable vessels with new ones.

Jet-ski operators have also skirted the regulation by bringing in machines registered in other provinces.

Technically a Thai sea captain’s license is required of anyone operating a jet-ski, but the authorities have never been willing or able to enforce the regulation in Phuket.