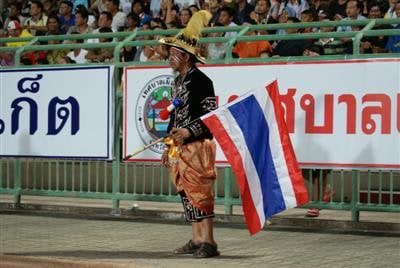 PHUKET CITY: Organizers of the Phuket Kata Group Cup have announced the opening fixtures for the four-team tournament, which kicks off on October 27 at Surakul Stadium.

The fixtures will take place at 5pm and 7pm respectively.

The two winning sides will face each other in the final, scheduled to take place after the third/fourth place match on October 29.

Between the semifinals and the final, the Thailand squad will be divided in two to play an exhibition match for spectators at Surakul Stadium on October 28.

The tournament will be broadcast live across Thailand, Vietnam and Burma.

The 46-member Thailand XI squad will arrive in Phuket on October 26.

Robson will use the tournament to cast his eye over the players at his disposal as he attempts to secure Thailand’s place at the 2011 Asian Cup.

The match will give local football fans the chance to watch their heroes live for the first time since the heartbreaking 2008 King’s Cup defeat to Denmark.

With back-to-back Asian Cup qualifying matches against Singapore on the horizon, Robson will look to get his tenure off to a flying start as the team looks to build on a good sequence of results, following hard-earned draws in Iran and at home to Liverpool FC earlier this year.

Proceeds, after costs, will go to a fund to aid poor families facing catastrophic medical bills.

The tournament was inspired by the struggle of Burmese baby Nichapa, who was born on August 9 with the rare ‘mermaid syndrome’ and who passed away one month later.