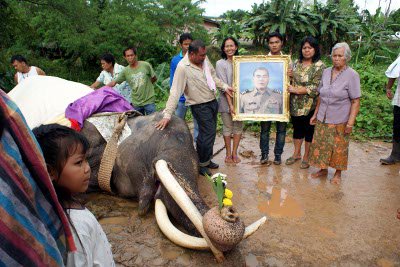 PHUKET: Villagers of Lam Tab District in Krabi, a 40-minute boat ride across Phang Nga Bay from Phuket, are mourning the death of one of their most respected members – 67-year-old Plai Sang.

The bull elephant was caught in 1956 and is believed to have been a sibling of Plai Pra Sawet, a highly respected elephant that was caught and handed over to the care of HM King Bhumibol Adulyadej that same year.

“This is a big loss for the people of Lam Tab because Plai Sang was dignified,” said village chief Samran Nuansomsri.

“Kamnan [subdistrict chief] Larb caught him at Nong Jood in Din Udom subdistrict in 1956, the same year and at the place where Plai Pra Sawet, HM The King’s elephant, was caught.

“We believe that Plai Sang was a sibling of Plai Sawet, from the same father but from a different mother,” he said.

More than 100 local residents on Saturday gathered to pay their respects at the house of 44-year-old Santi Srisuk, who took care of Plai Sang after his father Kamnan Larb died.

“Plai Sang was sick for the past six months. We had been treating him and he seemed to have recovered, but a week ago he started to look like he was depressed. Then on Saturday he suddenly became very ill and died at 10am,” Mr Santi said.

A funeral service was held on Saturday and Plai Sang’s remains were buried near Mr Santi’s home.

Villagers will make merit for nine days and nine nights is honor of Plai Sang.

“He was a dignified elephant. Local residents loved him. His death has caused much grief among local villagers. He was highly respected around here,” Mr Santi said.

Dispute between Phuket expats may lead to charges of extortion