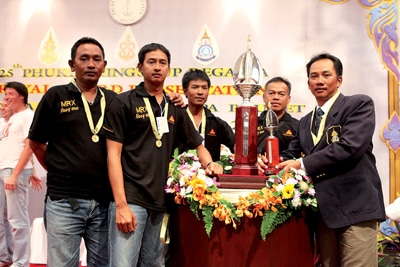 PHUKET: It has been quite a few years since I’ve joined the melee of press at Phuket’s King’s Cup Regatta. But this year was special. It was the 25th regatta and the closing party was a celebration of a sailing event that has survived such catastrophes as tsunamis, bird flu, economic disasters, change of venues and unreliable sponsorship.

The King’s Cup Regatta was launched in 1987 which was the same year Phuket reached out to the world and invited global visitors to the island. It was the year that the Phuket Yacht Club opened on Nai Harn Beach, but also marked the opening of the Dusit Laguna, the first of the Laguna Phuket resorts, the Phuket Arcadia Resort (now branded a Hilton) at Karon Beach and Le Meridien Phuket just south of Patong Beach. It was an exciting year to be on the island.

Mom Tri Devakul, a Harvard trained Thai architect who built the Phuket Yacht Club and The Boathouse, inspired the inauguration of a sailing regatta to mark King Bhumibol Adulyadej’s 60th birthday as His Majesty was a skilled and award winning sailor. The first regatta was mostly a family affair with almost any boat found floating around Phuket invited to join.

Twenty-five years ago, few of Phuket’s local Thai residents understood why anyone would want to spend time on a boat in the strong sun, which was certain to darken the skin. So the Regatta was mostly an expat affair assisted by the long established Royal Varuna Yacht Club from Pattaya.

Duncan Worthington has been on the Organizing Committee of the King’s Cup since the late 1990s. He is the sole survivor of the original team who produced the annual event. He has served as Director of Media and Communications for the past eight years.

“Every year we struggle to find sponsors and to broaden the appeal of the King’s Cup. We are proud that it is the most popular, well attended regatta in Asia due to the quality of keel boats and multi-hulls that participate. The King’s Cup Regatta has grown in international stature. This year we had sailors from 33 countries from as far away as Kenya, Ireland, Turkey and a large contingent from Russia.” said Duncan.

Duncan and the Organizing Committee begin work in March and meet throughout the year to create a Regatta that will maintain its reputation as the leading racing event in Asia. Critical to their work is Simon James who sets two courses, one for the sleek, faster boats and another for those craft not built to compete in a fast moving regatta.

Though the main sponsor for the 2011 King’s Cup Regatta was PTT, a major petroleum corporation, the event could not happen without the generous support of the Kata Group of Resorts. Some years ago when the Phuket Yacht Club was sold and the new owners decided not to support the regatta, David Ratcliffe approached Khun Pamuke Achariyachai, MD of the Kata Group, and offered to move the regatta to Kata Beach. Khun Pamuke immediately embraced the idea and the King’s Cup has been based at the Kata Beach Resort ever since.

“The King’s Cup is one of Phuket’s best events. It brings about 1,000 sailors to the island during the regatta and an estimated 40 million baht is added to the local economy from accommodation and meals,” added Duncan.

But still the King’s Cup is not the event I remember from twenty years ago. When I attended the awards ceremony, I was pleased to see ML Usni Pramoj, who has represented HM King Bhumibol for 23 years, on the stage presenting the winners with their trophies. Also, Radab Kanchanavanit, who hails from a pioneering family of Thai leisure sailors, was Master of Ceremony. Peter Cummins, the legendary Pattaya journalist who has reported on every Kings Cup since 1987, was seen in fine form. But the great names in Phuket sailing were missing.

Again Duncan commented, “We’d like to see more participation from the local community. It seems the King’s Cup Regatta has become such a high profile international event that it perhaps discourages our local sailors.”

An exception to this is the Phuket Sailing Squadron, based at Ao Yon on Phuket’s southeastern shore. The outfit’s leader, Katy Gooch, has been training young Thai students in the skills of racing dinghies. She provided twenty entries in this year’s event.

Also, for the first time, 19 kite boarders from around the world were invited, each of whom brought their own sponsors.

For those of you who may not yet have attended one, the King’s Cup Regatta is a great celebration of humans’ ability to have fun with the wind and sea while testing their skills in what often becomes very intense competition for great honor.