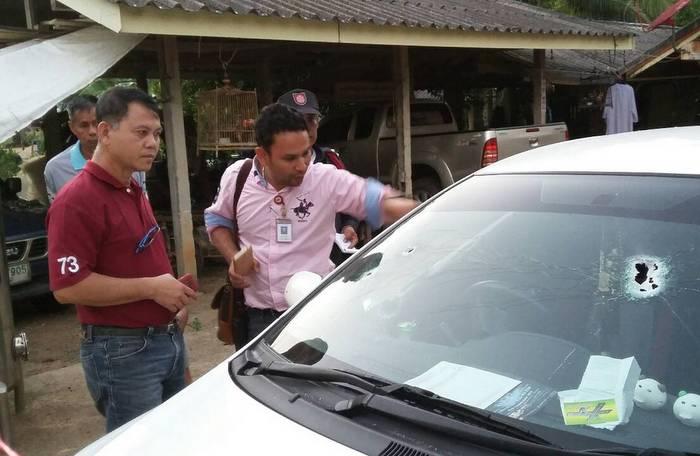 KRABI: Krabi Police are hunting for a gang of men that gunned down an influential village headman (Phu Yai Baan) in Krabi on Tuesday.

“Mr Chanwit’s wife told us that at least three men in a tan Toyota Vigo pick-up truck shot at her husband at the gate of their house, and then immediately sped away,” Maj Gen Nunthadej said.

“She believes that the men were waiting outside their home for her husband to leave.”

Mr Chanwit was taken to Krabi Hospital where he died from his injuries at about 9pm..

Police believe that the motive may have been either political or business related.

“Mr Chanwit was quite an influential man. He was close friends with the secretary of the president of the Krabi Provincial Administrative Office (OrBorJor), and he had land and construction businesses,” Gen Nunthadej said.

Last week, Mr Chanwit ran for election in the Khao Kram subdistrict Kamnan. After he and his opponent tied, the committee chose at random to elect the other party. However, police are unsure if the incident is related to his murder.

Meanwhile, Somporn Janorn of the Krabi Village Headmen Association, submitted a letter to the Krabi Governor, requesting that police conduct a thorough and swift investigation.

“At this stage, we’ve collected quite a lot of evidence. However, we prefer not to reveal any further information until we make arrests,” Gen Nunthadej added.