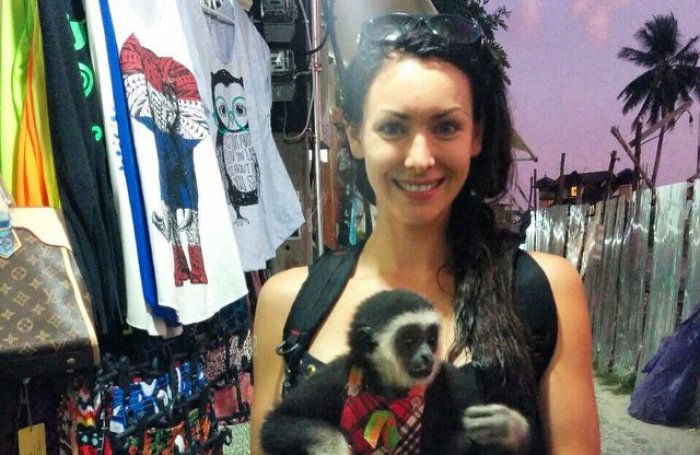 PHUKET: Officers have yet to arrest a gibbon tout caught on video earlier this week while working on the walking streets of Phi Phi Don.

The video, sent to the Phuket Gazette by a reader, clearly shows the culprit’s face and was forwarded to officials on Tuesday evening. As of today, no arrest has been made, confirmed Lt Col Danai Niyomdecha of the Phi Phi Island Police.

“The touts have disappeared for a while. We will go back to check when we receive tip-offs,” Lt Col Danai said.

Despite Lt Col Danai’s statement to the Gazette, tourists spotted the gibbon tout in the same area at about the same time, multiple nights in a row. Lt Col Danai did not clarify what he meant by his statement regarding the “disappearance” of the touts.

Recent success in arresting gibbon touts has been spearheaded by ‘Non Hunting Zone’ officers from national parks and Thung Talay.

“I really appreciate the video clip being sent to us. We mostly receive photos, but a video like this is much clearer,” said Boonname Chauyradom, assistant park chief of the Hat Noppharat Thara – Mu Ko Phi Phi National Park.

Mr Boonname vowed to take officers on Wednesday night to the area where the tout was sighted. However, rough weather prevented them from accessing Phi Phi Don.

Chief of the Thung Talay Non Hunting Zone, Suwat Suksiri, told the Gazette that gibbon touts were starting to recognize his officers’ faces, allowing them to hide whenever an investigation team was sent to the island.

“I think local police and park officers need to step up their enforcement. At this point, we are wasting our time, as we are unable to find the gibbon touts when we get to the area,” said Mr Suwat.

Officials have also failed to make any arrests in connection with photographic evidence of two men with gibbons walking down Monkey Beach and offering to take pictures of tourists holding the apes. The pictures were handed over to officials earlier this month (story here).

With the possibility of making more than 500,000 baht a month during the high season, the maximum punishment of not more than 4,000 baht, four years imprisonment, or both is hardly a deterrent, noted Mr Suwat.

Mr Suwat explained that according to their records, there are still at least five gibbons – a protected species in Thailand – being held in captivity and used by touts in Phi Phi. This number is much smaller than his previous estimate of about 20 gibbons on the island in August.

Gibbons are generally brought over to Phi Phi from Phuket. These baby gibbons, costing about 25,000 baht each, are sourced from the wild by poachers who take them from their mothers. The mother is killed in the process, Mr Suwat explained.

Complaints or tip-offs can be filed directly to the Department of National Parks, Wildlife and Plant Conservation (DNP) – hotline at 1362.