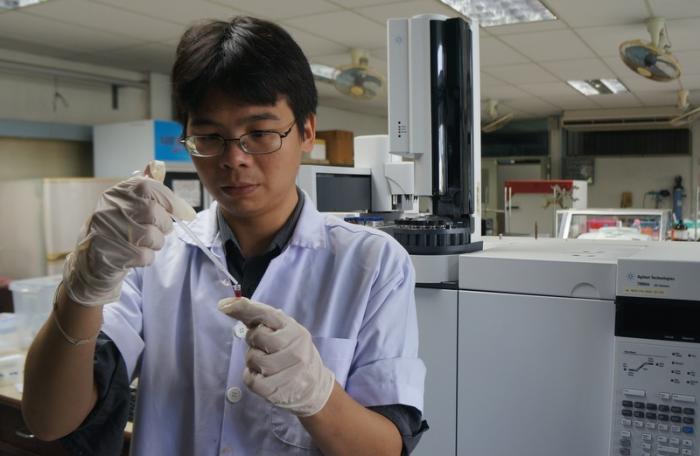 The invention comes in the wake of several recent bombings in Thailand. The competition included more than 800 inventions submitted by participants from more than 40 countries around the world.

The invention also won a special prize from the Association of Polish Inventors and Rationalizers.

Four of the research team members are professors from the Prince of Songkla University (PSU) Phuket Campus, namely Assistant Prof Dr Aree Choodum, Dr Wadcharawadee Limsakul, Asst Prof Dr Worawit Wongniramaikul and Jutaporn Keson. The other two are from the PSU Hat Yai campus, namely Associate Prof Dr Proespichaya Kanatharana, as well as Prof Dr Niamh Nic Daeid, who is originally from the University of Dundee, Scotland, but currently a member of the research team.

“Last week, we gave a presentation to the Ministry of Defence and received a very good response. They are very interested in our research and are planning to bring the prime minister up to speed on its usage,” said Dr Aree. “In addition to local interest, our team has also been contacted by companies in Poland for commercial use of our testing kit in their country.”

The team also had a chance to conduct a test at the remains of the Bangkok blast site. Even though the tests were performed a week after the bombings, they still found evidence of Trinitrotoluene (TNT) usage and submitted it to the police, Dr Aree told the Phuket Gazette.

“Our main objective is to solve the recent problems faced by our society, such as bombings, terrorist attacks and other unstable situations that have been taking place not only in Thailand and Phuket, but all over the world. We felt there was a need to equip ourselves with simplified gear to deal with these new problems,” said Dr Aree.

“The unique and extraordinary quality of this new invention is that it is cheap, portable, easy to use and quick to provide results; it can be used both before and after a bombing,” she added.

“The test kits comprise a polymer in a small tube. We can take it to the scene, conduct the test, and know the results immediately,” Dr Aree said.

“The testing kit only costs about 30 to 80 satang per tube, as opposed to other tests which cost up to 78 baht per test. It can also be reused up to nine times, which effectively brings the cost down to 10 satang per test,” said Dr Aree.

Additionally, the results can be obtained immediately, whereas previously, officers had to collect evidence from the scene of the incident and then wait for lab technicians to perform tests and deliver their findings.

“Everyone can do it. However, the tests are more suitable for professionals, such as Explosive Ordnance Disposal (EOD) personnel, police, military and others in the field of national security,” she added.

“The kit also allows the user to determine the type of the explosive and its origin right away. The procedure itself is deceptively simple. Acetone cotton buds are used to collect samples and water is then added to it. The change in color of the kits helps to identify what kind of explosives have been used,” Dr Aree explained.

The sample can be obtained from virtually any surface in the vicinity of the blast – dirt, grass, clothes, body parts and so on.

“This means that the test can be performed before an explosion even occurs; we can use it to test suspects, suspicious items, or areas at risk, so that officers can take immediate action,” explained Dr Aree.

There are eight types of kits available to test these explosive substances:

“There are currently eight types of chemical substances that people use to make bombs. At the moment, we have created kits for six of the most popular ones. We are researching the other two, which are now gaining popularity – Peroxide and Acid,” said Dr Aree.

“TNT is the most widely used explosive material in the world, while in the deep south of Thailand, Nitrate is the most popular one,” she added.

“This breakthrough is beneficial in many different sectors – economics, science, and security, to name a few. Even though these kits can be used both before and after explosions, we prefer to use them before. It is our hope that our work can help Thailand, as well as other countries across the globe,” Dr Aree said.

“We are conducting research to help people in light of recent occurrences, and plan to do our best to find feasible solutions.

“We are glad to share our knowledge with everyone who wishes to use it,” Dr Aree said.