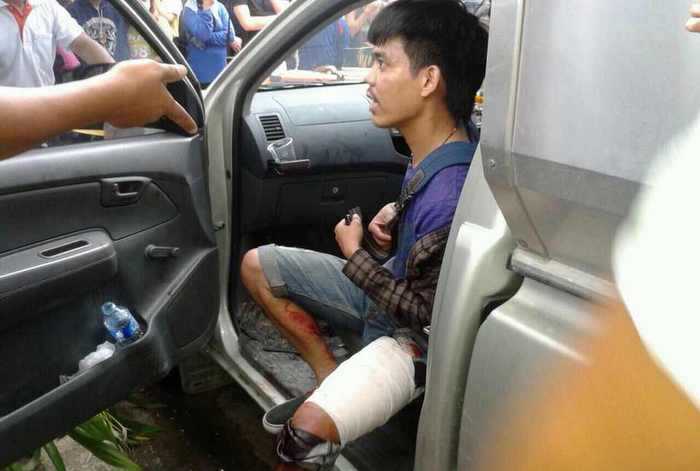 PHUKET: A Krabi man attempted to slay a traffic police officer with a machete in front of hundreds of tourists after he was issued a warning for parking in a no-parking zone in the beach town of Ao Nang on Monday.

Sgt Apichart Narksa-nga and Sgt Jirameth Laosirikul of the Krabi City Police had noticed a pick-up truck parked in a prohibited area near the longtail jump-off point to Railey and Tonsai.

“They approached Thawatchai Phodhirak, 21, to issue him a warning. However, instead of acknowledging the violation, he started verbally abusing the officers,” Lt Veerapan Khongpul of the Krabi City Police told the Phuket Gazette.

Given Mr Thawatchai’s reaction, the officers decided to search the truck. They quickly found a long -bladed machete.

“Mr Thawatchai then tried to drive away, but the officers were able to take away his keys,” Lt Veerapan said.

“That’s when he pulled a machete out from behind his seat and tired to stabbed Sgt Apichart, who then attempted to flee. Mr Thawatchai got out of the truck and started to chase Sgt Apichart to kill him.”

At this point, Sgt Apichart drew his gun and fired a warning shot into the sky. However, Mr Thawatchai continued to pursue him, Lt Veerapan said.

“He had no choice but to shoot Mr Thawatchai twice in the leg to stop him. Even then, Mr Thawatchai didn’t immediately stop. He continued to chase Sgt Apichart for a few moments longer, before falling down.”

Mr Thawatchai was charged for the attempted murder of a policeman and carrying a dangerous weapon in public.

“We are suspicious that he might be using some form of methamphetamine, so he will be tested for drugs,” Lt Veerapan said.