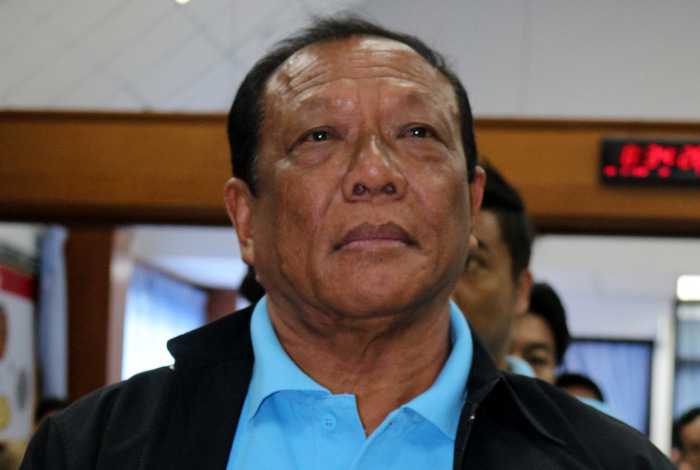 PHUKET: Police have ordered an autopsy to be performed on the body of former Patong mayor Pian Keesin in order to rule out foul play.

Mr Pian was found dead in his home north of Phuket Town this morning (story here).

“At this stage, doctors presume he died of a heart attack or cerebral hemorrhage,” Col Sien Kaewthong of the Phuket City Police told the Phuket Gazette.

“His body will be taken to Surat Thani as soon as possible, where forensic officers at Region 8 Police headquarters will conduct an autopsy to determine the cause of death.”

“We saw no signs of a struggle. It looked like he died while taking a shower,” Col Sien explained.

Mr Pian’s body was found by his driver, Chanya Nhuset, who arrived at the house – at the Rock Garden housing estate in Samkong – to pick him up at 7:30am.

News of Mr Pian’s death spread quickly throughout Phuket, prompting crowds of people to gather in front of the home. Photo: PGTV

“I waited in the car until 10am, but he did not show up,” Mr Chanya said. “I called him, but nobody answered.

“Then I called Ms Nat, who lives in the house with him. Ms Nat was not home; she was on her way back from Surat Thani.”

Eventually Ms Nat’s niece, who was in the house, opened the door for Mr Chanya to come in.

“I went to his room and knocked on the door, but nobody answered,” Mr Chanya said. “I opened the bedroom door, as it was not locked, and saw him lying on the [en-suite] bathroom floor.

“I was shocked – his feet and hands were so pale. I immediately called the police.”

News of Mr Pian’s death spread quickly throughout Phuket, prompting crowds of people to gather in front of the home.

“We had to keep anyone who wasn’t a relative off the premises so we could do our job,” Col Sien said.

“His body will be returned from Surat Thani as soon as the cause of death has been confirmed, so that his funeral can be held,” said Col Sien.

Prab Keesin, who heads the Pisona Group of companies founded by his father, today on his Facebook page lamented the death of his father “who gave him life and all opportunities”.

Mr Pian, along with his son Prab Keesin, was facing charges of extortion and criminal activity carried out by a criminal association after military personnel and Region 8 Police raided his home in August.

Mr Pian was suspended from his post as Mayor of Patong in September last year (story here) and found guilty of vote fraud in March this year. However, the court issued him a “yellow card”, allowing him to run for re-election (story here).