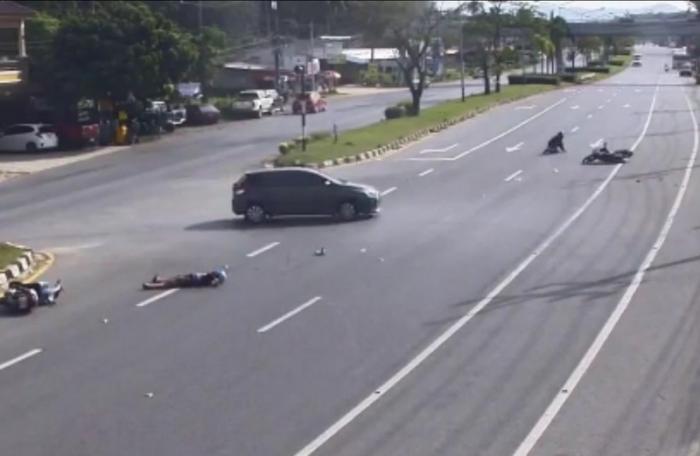 PHUKET: A 60-year-old man was hit by a truck moments after staggering to his feet from a motorbike crash on Thepkrasattri Road in Phuket on Sunday.

CCTV video recorded Kan Sawaengkaew, 60, attempting to cut across multiple northbound lanes toward a u-turn point and crashing into 23-year-old Chinese national Chuai Cher. Both crash victims were sent skidding across the empty stretch of road with their motorbikes. However, when Mr Kan regained his footing, he was struck by an oncoming truck.

“We have yet to charge the driver of the truck, as everyone involved in the incident will be meeting to negotiate compensation tomorrow,” Tah Chat Chai Police Deputy Superintendent Sarit Bootnongsaeng told the Phuket Gazette.

As case officer Lt Col Sarit was not in the office when he spoke to the Gazette, he was unable to provide the name of the truck driver. However, rescue workers who tended to Mr Kan and Ms Chuai at the scene were able to confirm the victims’ names and ages.

“The accident occurred near Hongyok Bumrung School in Thalang,” said Col Sarit. “Thankfully, nobody was killed. The Chinese woman and the other victim have already been discharged from the hospital.”

Island prepares to “Light Up Phuket’ to honor tsunami victims