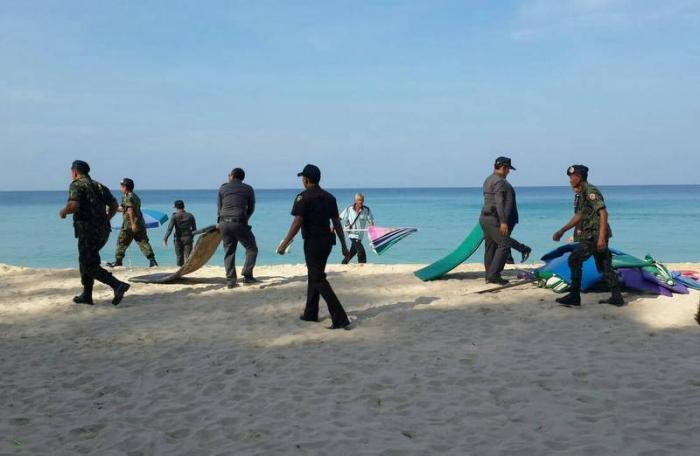 PHUKET: In the wake of an anonymous complaint to the Governor’s Office, officials seized about 100 illegal beach mats and umbrellas from Surin Beach this morning.

“We sent a team of about 30 officers in a joint mission to the beach after receiving a complaint that the beach vendors were breaking the rules,” Cherng Talay Police Superintendent Serm Kwannimit told the Phuket Gazette.

All beach furniture was banned on Surin Beach following pushy vendors breaching the 10 per cent zone, which had originally allowed them to offer services in designated areas. Following the ban, the beach was dubbed a ‘Beach of Honor’ to mark HM King Bhumibol Adulyadej and HM Queen Sirikit’s visit to its sands in 1959 (story here).

“None of the vendors claimed ownership of the items, so nobody has been charged. However, all the beach furniture was confiscated and taken to the police station,” said Col Serm. “We are not picking on anyone. We are just enforcing the law. If vendors want the items back, they can collect them at the station and be charged with encroaching on public land.”

Earlier today, the Gazette received a letter from an anonymous source who claimed to have filed a formal letter of complaint to the governor with regards to beach vendors on Surin Beach. The source, who owns a business in the area, asked to remain anonymous ‘for fear of influential people on Surin beach road’.

“On Thursday, December 10, our last stop was at Surin Beach to enjoy some swimming. Four of us were spreading blankets on the sand and were told by a caretaker beach boy from [name withheld*] beach club that we had to rent out the mats and white umbrellas which were spread out the length of 10 meters along the beach, or we had to move farther down the beach,” the source wrote.

The letter goes on to cite an employee of another establishment hassling tourists in a similar fashion.

“This seems very illegal and Surin Beach now looks very commercial and privatized. I read that only ten per cent [sic] of the area was legal. This looks like 100 per cent,” the source wrote. “Surin Beach looked beautiful during low season. Please do not let it return to junk again.”

*The Gazette has withheld the name of the beach club pending confirmation of the allegation.