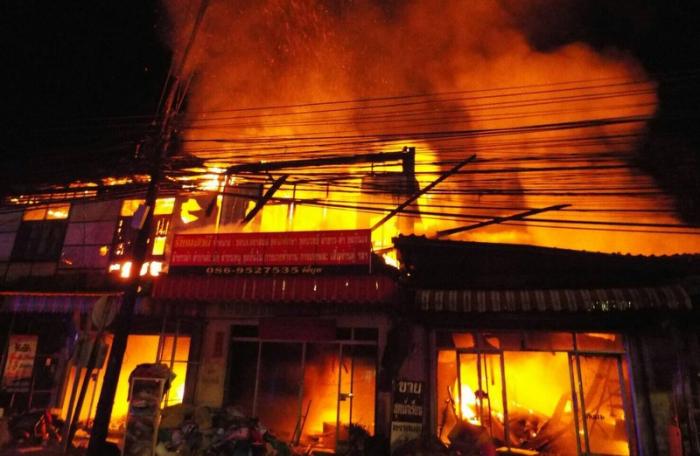 PHUKET: No injuries were reported in an early morning fire, in which at least five shop-houses were burned down in Thalang today.

The flames caused an estimated 5 million baht worth of losses, but officials believe that this number may turn out to be higher as more accurate estimates emerge.

“We received a report about the fire at about 4:30am from Baan Kian Kao, Moo 1. Ten fire trucks were dispatched immediately,” said Lt Sunan Petchnoo of Thalang Police.

“The houses that caught fire were half-wooden, half-concrete two-storey flats. The flames were widespread, so we had to close down the road to stop them from spreading further,” he added.

Firefighters spent more than an hour battling the flames. Officials at the scene said it was difficult to control due to heavy winds and the vast number of flammable items in the shops, such as clothes, shoes and bags.

“All the belongings inside the houses were completely burnt. At this stage, we believe that it started due to an electrical short circuit, but we will question the house owners further in order to figure out the cause,” said Lt Sunan.