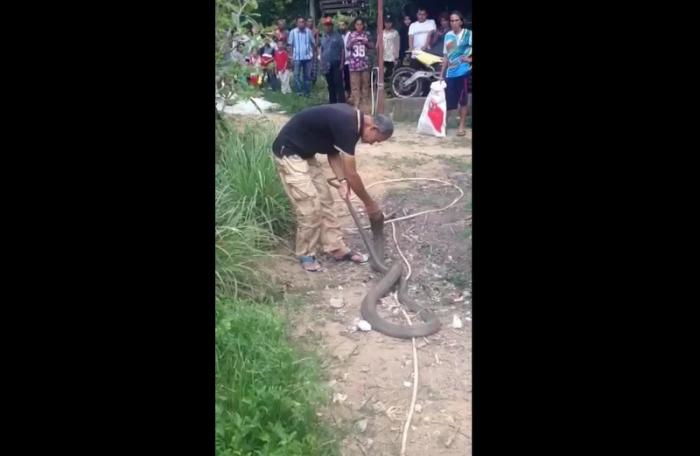 PHUKET: Bang Tao locals were stunned when a local snake catcher managed to capture a three-meter-long king cobra with his bare hands in a matter of minutes yesterday evening.

The incident occurred at a house in Bang Tao Soi 7 at about 5pm yesterday. A local woman, Kob, saw the snake making its way into her neighbor Surin Bilabdullah’s house, so she screamed loudly to get his attention.

Mr Surin rushed out of the house with the intention of scaring the snake away with a stick, but when he saw how big it was, he called the community ‘snake master’ Ei Manabut for help.

Mr Ei single-handedly managed to calm down the seven-kilogram serpent and place it on his shoulders, while Mr Surin broadcast the whole incident live on Facebook.

Others, who had gathered around to watch the performance, also snapped photographs and videos.

Once the creature was calm, Mr Ei put it inside a sack and released it into a nearby forest.

Mr Surin had previously warned people about a king cobra that his brother had spotted in the area earlier this week.