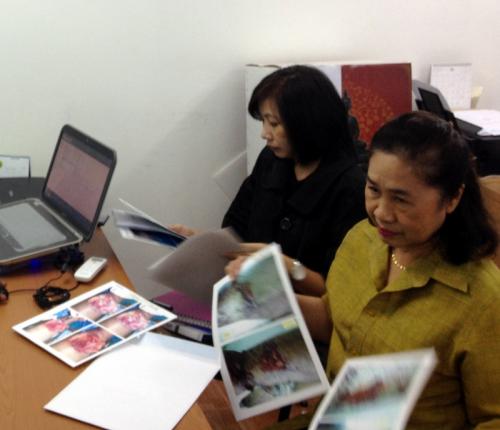 PHUKET: A compensation complaint for a hospital bill totalling nearly 700,000 baht was filed with Wichit Police yesterday after a man was savaged in a vicious pit bull attack.

Benjarat Ekpaiboon’s 33-year-old son, Tiensak Ekpaiboon, was attacked by three of their neighbor’s five pit bulls around 8am on February 6.

“He’s been in hospital for almost three weeks now. Some of the wounds, like the ones to his face, chest and arm are better, but the deep wounds to his legs still need treatment, Mrs Benjarat told the Phuket Gazette today.

Mr Tiensak was still deciding whether he would prefer a skin graft to repair his leg wounds or if he would just leave them to heal naturally, Mrs Benjarat explained.

Her son was attacked by the pit bulls moments after they attempted to attack a woman in the area, Ms Benjarat said.

“Fortunately, the woman was able to use her purse and umbrella to fend them off. Though she did lose her purse,” Mrs Benjarat said. “She filed a complaint with the Wichit Police, too.”

Mr Tiensak was taken to Bangkok Hospital Phuket for treatment after several neighbors were able to chase off the dogs.

“We tried to negotiate with the neighbor at the police station after the incident,” Mrs Benjarat said at the time of filing the complaint.

“The dogs’ owner asked us to transfer Tiensak to the Phuket Provincial Administration Organization Hospital [in Rassada], but I declined. Our hospital bill is now about 700,000 baht, but the owner has paid only 300,000 baht and has refused to cover the rest of the bill,” she said.

Mrs Benjarat explained to the Gazette that the owner of the five pit bulls had been raising the animals for about five years. Two of the dogs were kept inside and three were kept in a concrete area specially made for them outside, she said.

“I was also attacked by the dogs once, but it was not very serious, so I did not file a complaint,” she added.