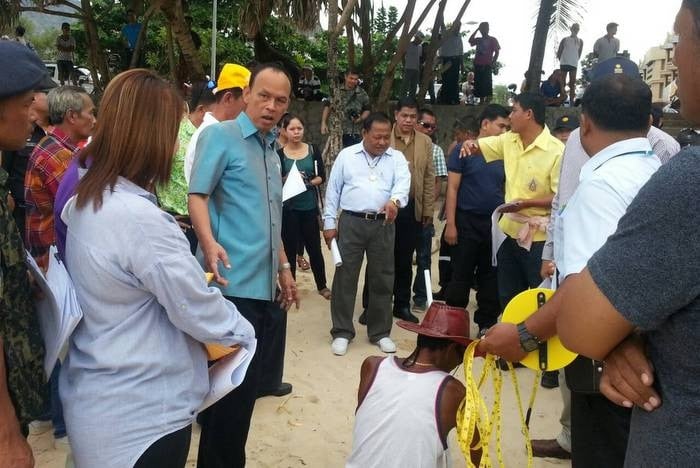 PHUKET: Three of Phuket’s most popular beaches, which have been given the green light for a three-month beach vendor trial period, were inspected by officials yesterday to establish vendor-friendly zones.

The trial period was announced at a meeting in Provincial Hall last month by Governor Nisit Jansomwong, during which he laid down a stringent list of conditions under which vendors will be permitted to return to work (story here).

The three beaches inspected yesterday were Kata, Karon and Nai Harn. No specific date was given for when the trial will begin, but vendors are expected to return to the sands next month, Vice Governor Somkiet Sangkaosuttirak confirmed to the Phuket Gazette today.

“We have decided to allow beach vendors back to these three beaches as a trial of our overall beach organization plan,” he explained.

“If these trials prove successful, we will have other Phuket beaches start their trials as well. We will discuss the plan with local administrative offices and beach vendors beforehand.”

The same rules will apply for the vendors as were announced by Governor Nisit last month, said V/Gov Somkiet.

“We understand that vendors are facing problems after they lost their jobs due to the NCPO [National Council for Peace and Order] beach-cleanup campaign last year. This is why we are trying to find a compromise that will allow them to work but also keep the beaches clean,” he explained.

“We are very satisfied that the governor has finally allowed vendors back on the beach. The vendors on Kata and Karon beaches are all locals and were greatly affected by the cleanup campaign,” she said.

“They have been jobless for a while and their savings are running low. This will bring their spirits back.”