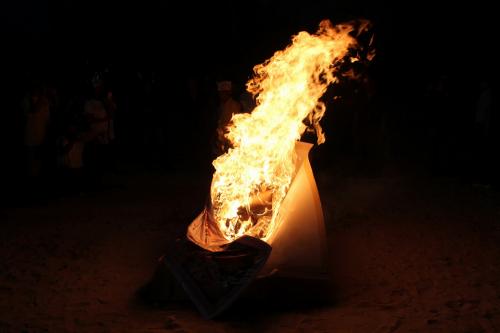 PHUKET: About 100 members of the V-Phuket protest group gathered at the Phuket Town waterfront in Saphan Hin to denounce former Prime Minister Thaksin Shinawatra and burn his “coffin” to mark his 64th birthday yesterday.

The event was set up like a Thai-style funeral ceremony, which featured a coffin with a wreath in laid in front of it.

The makeshift coffin featured a picture of Mr Thaksin laying down, with a coin in his mouth.

One sign placed next to the coffin read: “He can no longer cheat us now that he is dead, and with a single coin in his mouth – the only money he can get.”

Another sign read: “All that’s left after he died is his legacy of rottenness.”

Chan flowers – paper flowers commonly used in Thai funeral ceremonies – were placed on and around the coffin. Then, as the coffin was set ablaze, the protesters sang a parody of a birthday song.

“The purpose of the coffin-burning ceremony today was to convey the message to Thaksin to ‘Go to hell’ on his birthday,” said an unidentified V-Phuket protester.

“The red shirts celebrated Thaksin’s birthday by making a big cake and blowing out the candles [story here]. We were celebrating too, but by setting fire to his coffin rather than lighting the candles on his birthday cake,” the protester said.

Tourism minister gets tough with Phuket taxi and vehicle-rental cowboys