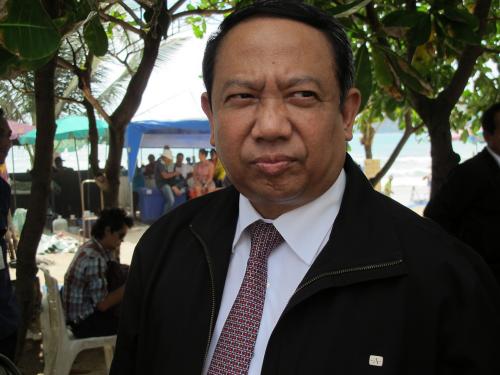 PHUKET: Tourism and Sports Minister Somsak Pureesrisak has blankly called for an end to the age-old Phuket practice of foreigners’ passports being held as a condition of renting motorbikes, cars and jet-skis

“We are deeply concerned about this situation. Rental-vehicle operators demand the passports of customers. Strictly speaking, this is illegal – passports simply cannot be handed-over to third-parties,” Minister Somsak said.

“Because passports are the properties of the governments that issue them, those who seize them – for any reason – are in fact seizing the property of a foreign government.

“The Ministry of Tourism and Sports and the Foreign Affairs Ministry are trying to formulate a law to rectify this situation, and to establish penalties for offenders, as soon as we can,” he said.

Minister Somsak suggested temporary drivers’ licenses be issued to visitors as a substitute. These would require the renter to prove that he or she already has a valid license in their own country.

“If the individual forgets to bring their home-country driver’s license, or they do not have one, they would have to contact the Land Transportation Office, which would be able to providing a temporary license within four hours of testing the person’s driving skills,” he said.

Minister Somsak did not elaborate on the practice of law-enforcement agencies confiscating passports of tourists while conducting investigations.

“Vehicle-rental operators should accept a signed copy of the customer’s passport* instead. This means we could still coordinate with Immigration Police if the renter does not return the vehicle or seriously damages it, and then tries to escape from Thailand. Immigration might refuse them permission to leave until the case is settled,” he said.

But DSI Chief Tarit also issued a clear warning: “Regardless of whatever measures are taken to facilitate Phuket’s tourism industry being cleaned up, after we have established our Organized Crime Center for Tourism [story here], we will crack down on all illegal businesses – including dodgy vehicle-rental operators, illegal taxis and other law-breakers.”

“We know of 59 businesses – including 13 in Phuket – that have used nominees [so they could be legally registered as companies], and we are conducting special investigations into these. We have taken legal action against 14 businesses already and are working through the list,” he added.

“Concerning organized crime in Phuket, this is my last warning – you have 15 days to legalize your activities. After that, we will clean up the entire island,” Mr Tarit warned.

“If we learn that local government officials have been involved, they will not be exempt from the full force of the law,” he said.

* For details of how to provide a signed copy of a passport while protecting yourself from identity theft, see the Phuket Gazette‘s Issues & Answers section, “Signed copies of passports in Thailand versus identity theft” (click here).