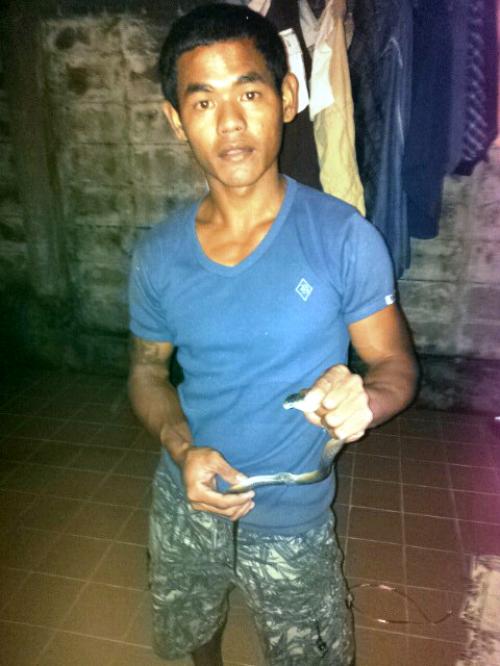 PHUKET: When a resident of Ban Maneekram, Chalong, realized he had unwittingly hosted a visiting 40-cm cobra for the weekend, he knew what to do.

“When I noticed the juvenile cobra, I immediately remembered your article headlined, ‘Snakes in the house: who you gonna call?’ (story here) and remembered you suggested calling the number of the Kusoldharn Foundation. So this is what I did,” Mr Manu told the Phuket Gazette.

However, because his home lay beyond the area of Kusoldharm Foundation operations, a Kusoldharm staffer provided him with the number of another organization that would be able to help, the Ruamjai Rescue Foundation.

“After catching the snake they bagged it and told me they were going to release the youngster somewhere in the forest,” Mr Manu said.

My Manu was quick to praise the organization. “I really appreciated their actions, speed and professionalism. I wanted to give them a tip, but they refused. But after I told them to put it in the donation-box, they accepted. Great job.”

A Ruamjai Rescue worker told the Gazette, “If you see any snakes, bees or other dangerous animals, please call us, 076- 283 346. We are available 24-7. All our services are free of charge.

We assist residents and tourists in Chalong, from Kwang Road through to the Country Home housing area,” he stated with a smile that would disarm the most ferocious of beasts.

Phuket gold thieves out of gas, out of luck