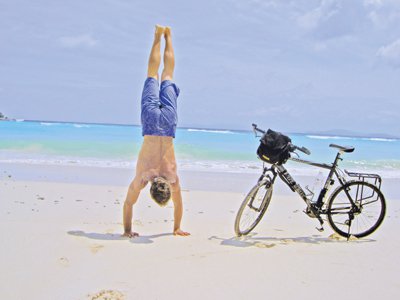 PHUKET: THE thought of cycling around Phuket probably enters most people’s minds about as frequently as wondering what it would be like to thrust a live cobra down the front of their underwear.

However, cycling around Phuket is undoubtedly growing in popularity, despite the obvious challenges associated with the endeavor.

On most days in the early dawn mist you’ll see phalanxes of Lycra-clad figures blithely darting in and out of the traffic, ascending vertiginous inclines, or chilling at roadside cafes.

The resurgence of cycling is a global phenomenon of which Phuket is a part, despite the fact that in all fairness it cannot be said that Phuket is particularly “cyclist-friendly”.

There are three key challenges the budding pedal-file must meet, whether you’re a road bike enthusiast, or a mountain biker. It’s hot, hilly and often hair-raising!

Ambient temperature need not be a deterrent to enjoyable cycling if a few basic rules are observed. Clearly early morning and late afternoons are the best times to be “on yer bike”. It’s cooler, and at 6am there’s a lot less traffic to dodge. In addition, at dawn and dusk the light is more beautiful, and that wonderful aspect of cycling that seems to closely unite you with the environment you’re gliding through, is all the more intense.

When out pedaling, drink lots of water, much more than you think you’ll need and sip it frequently, as your body can’t actually absorb a huge deluge all at once. After riding there’s nothing wrong with a couple of icy beers or a cola to replace the sugars you’ve used up and the minerals that sweating removes from your system.

Remember, even when it’s 30 degrees in Phuket, by cycling you are essentially in a 20 kilometer-an-hour wind if that’s your average speed, and the free flow of air over your skin cools you down and facilitates sweating. A sort of movable detox!

Over time, this column will introduce you to a whole range of fairly flat rides, but it’s an undeniable fact that there are hills aplenty around Phuket and some of them are very intimidating. However, as your fitness grows, climbing and conquering Phuket’s hills becomes an enjoyable challenge.

One morning you’ll find yourself saying, “I wonder what it would be like to cycle up and have a chat with the Big Buddha.” Then you’ll realize that your moment of pedaling enlightenment has arrived.

Like all sports, start off slowly only doing what your current fitness level will comfortably allow. You’ll be amazed how quickly your fitness builds with regular riding. Then it’s a case of, “Hills?… I laugh in the face of hills!”

Hair-raising is certainly a fair description of many cyclists’ reaction to dealing with marauding traffic, mangy dogs, potholes, broken glass and overloaded noodles carts coming at you with no lights on the wrong side of the road. The main arteries of Phuket are a raw Darwinian struggle for survival in which you, dear cyclist, are the lowest man in the brutal hierarchy of “Might is Right.”

You MUST cycle with the utmost care and attention at all times, looking every which way at every moment.

Always wear your crash hat and riding after dark cannot be recommended.

However, this column will take you to the many pleasant backwaters of Phuket, where riding is quiet and enjoyable, and you can delight in just being on a bike, in the fresh air, riding slowly along savoring the delights of our tropical island and discovering myriad quiet corners you never knew existed.

In the next column join Bicycling Baz for a classic Phuket ride… down to the lake at Nai Harn and along and around that delightful southern-most beach.

Phuket Lifestyle: SKÃ…L members give up their shirts for charity