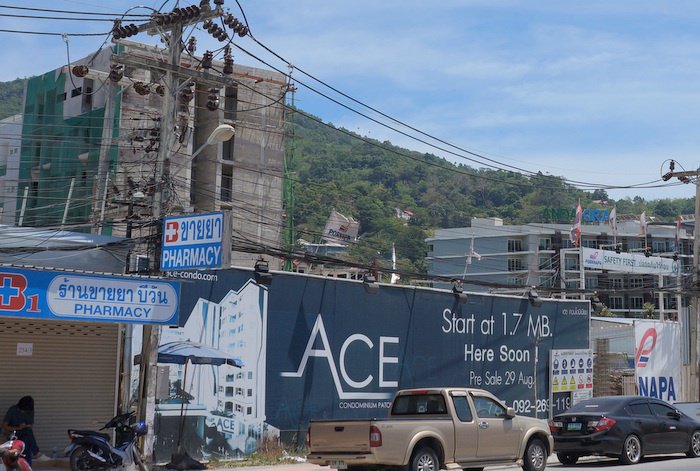 PHUKET: Police will hand the case against the developers of the unfinished condominium project Ace 1 over to the Public Prosecutor by September 9.

Despite the case being submitted, pre-build purchasers will be able to continue to file complaints and submit evidence to police, confirmed Lt Col Anukul Nuket of the Patong Police yesterday.

“We are still in the process of questioning buyers. Some of them have not filed a complaint yet, while others have just done so,” Lt Col Anukul said. “We still need several more days to get everything organized.”

Ace 1 condo, a nine-storey building comprising 183 rooms, was to be built on a 1,600-square-meter land plot. There was to be a standard-size swimming pool on the second floor, 24-hour security, a car park on the first floor, and an all-inclusive gym to help facilitate a healthy and active lifestyle.

“Although the contracts signed said that construction would start in February 2014 and be completed in April 2015, nothing has been built yet. The purchasers are very upset about this,” said Ampol Wongsiri, secretary general of the Consumer Protection Board (CPB), in July.

The unfinished project has been a simmering issue for months. On June 15, the company developing the project, Nine Property (Patong), was given two weeks to address compensation to pre-build purchasers (story here).

However, they allegedly took no action.

CPB officers have been negotiating with the company to refund the buyers’ booking and down payments for several months, but to no avail, Mr Ampol said.

Consequently, the Consumer Protection Police Division has slapped company director Prawat Suppipattana and shareholder Sutporn Litkitinthirak with five charges: defrauding the public; developing a project without permission according to Land Development Act BE 2543; generating fake IT information leading to members of the public suffering losses according to Computer Crime Act BE 2550 (2007); putting out fake or exaggerated advertisement leading to a misunderstanding of the main concept of the product or service according to Consumer Protection Act BE 2522 (1979); and failure to obtain permission to build a condominium according to the Building Control Act BE 2522.

“Evidence has been sent to the NACC [National Anti-Corruption Commission] in regards to suspected money laundering,” added Mr Ampol in July (story here).

CPB is also filing a civil suite with the Phuket Provincial Court to get the buyers’ money back.