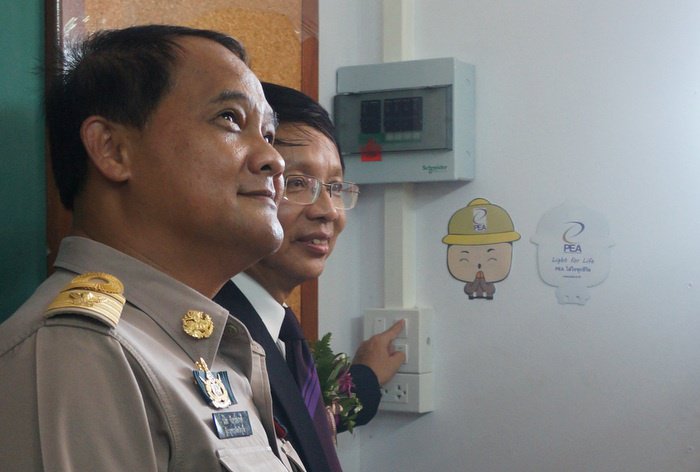 PHUKET: Much-needed mainland power is now flowing to Naka Yai and Coconut Island, off the coast of Phuket.

“We have invested in the project, not because we expect to make a profit, but because we can improve the quality of life for the locals and improve their economic situation,” said Provincial Electricity Authority (PEA) Governor Sermsakul Klaikaew, who chaired the opening ceremony with Phuket Governor Nisit Jansomwong yesterday.

Prior to the installation of the 112-million-baht submarine cable, island residents were only able to use electricity for about four or five hours a day. The cable, which has a maximum capacity of 14 mega watts, will be operational for about 30 years, confirmed Mr Sermsakul. Currently, the two islands have a combined power consumption of 1.2 mega watts a day.

“It goes without saying that this is probably the biggest development for us since we opened our doors in 2007,” said Tom Gordon, director of sales and marketing of The Village Coconut Island, the island’s dominate business. “For years we have fought hard through tough times to operate a fantastic island resort with huge operational costs due to the lack of [mainland] power. With these savings, we will be able to further develop the resort into one of Phuket’s top destinations, offering an island holiday on the doorstep of Phuket’s great activities and infrastructure.”

Also joining the festivities at the opening ceremony were children from the Baan Koh Maprao School.

“There are more than a thousand local people living on Coconut Island in 161 households. Though 149 houses use electricity generated by solar cells, it is not enough for everyone living here,” said Yunob Petchdee, the Baan Koh Maprao School director. “I am glad that PEA understands the situation and invested in the power supply to Coconut Island.”

Mr Gordon agreed that the new power source for the island was going to have a dramatic effect, not only on his resort, but also on the lives of the locals.

“For too long they have been struggling without power. Some have had to run small generators for basic lighting and the odd television set. However, many have been living in the dark ages. With mainland power, they will be able to support the community better, including the local school, mosque and family households. It is fair to say we all seem a lot happier now we are connected,” Mr Gordon said.

The installation of the submarine cable is part of a nationwide project to bring power to Thai islands.

“So far, we have supplied electricity to 23 islands around the nation, such as Samui, Phangan, Kood Island and Tao Island, as well as Naka Yai and Coconut Island,” Mr Sermsakul said.

All hands on deck for Phuket flood prevention