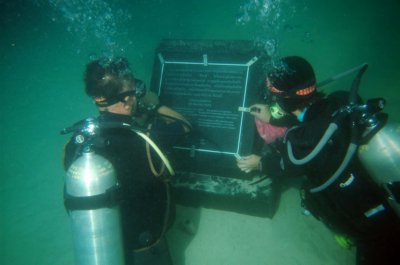 PHI PHI ISLANDS: Thailand’s first underwater tsunami memorial was laid down on the seabed in Tonsai Bay, off Koh Phi Phi Don, in a ceremony on September 30.

The memorial, 1.4 kilometers offshore and at a depth of 20 meters, took about one month to install. The The monument comprises three large granite markers, each 150 centimeters tall and arranged to form an equilateral triangle, with a smaller 80cm-high granite marker standing in the center.

The distance between each of the markers is 5,395cm, corresponding to the number of victims whose names and nationalities are identified. Visitors can see the memorial’s location from the three yellow buoys bobbing on the water surface.

At a location exactly 2,874cm from the memorial site is a traditional Thai sala, built from wood collected from the wreckage left behind by the tidal wave. The distance to the center of the monument represents the number of victims whose identity could not be determined.

Napasorn Kakai, Assistant Director of the Tourism Authority of Thailand Region 4, told the Gazette that it is hoped the memorial will lure divers and snorkelers back to the Phi Phi Islands.

“The three pyramids represent the three elements of earth, wind and water. Man must keep all three of these elements in natural balance; otherwise the forces of nature will restore the balance themselves. We hope the monument will serve as a reminder of the need to maintain ecological balance,” she added.

Representatives from England, France, China, Taiwan, Korea and Italy took part in the memorials’ dedication ceremony, which was attended by a total of about 200 people. The guests were also given a tour of the island’s new wastewater-treatment plant, funded by the Danish government, as well as the new tsunami warning towers and an onshore tsunami memorial garden.

Suriya’s wife talks to the Gazette