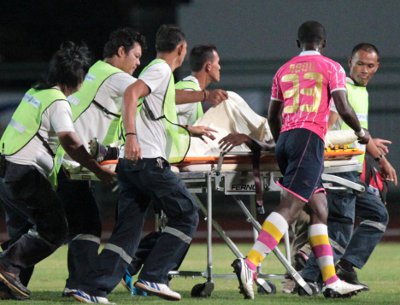 Noting that he has been suffering periodic convulsions, Mr Paitoon estimated Mr Ahmed’s chances of survival at 50%.

Mr Ahmed in one of three Ivory Coast players on the team on loan from Thai Premier League defending champions Muangthong United FC.

He has been a stalwart of the team during its rise to win the Division 2 South crown and its qualification for the playoffs for promotion to Division 1.

Mr Paitoon describes him as a great and very diligent player.

He suggested Mr Ahmed’s heart problems may have stemmed from stress brought on by the must-win nature of the match, possibly combined with lack of rest and his habit of not eating rice or other carbohydrates prior to competition.

Phuket Provincial Administration Organization President Paiboon Upatising was one of the many people who came to the hospital this afternoon to add his name to the growing list of signatures of people signing a guest book wishing Mr Ahmed the fastest possible recovery.

Mr Paiboon, who is also FC Phuket’s honorary president, said Mr Ahmed’s mother back in the Ivory Coast has been informed of his condition and is expected to travel to Phuket to assist in his care.

Team administrator Kazi Hans this morning told the Gazette that despite Mr Ahmed’s serious condition, changes in his breathing patterns when people he knows enter the room suggest he may have at least partial consciousness.

However, he has still been unable to open his eyes or speak since his collapse onto the turf in the second half of the the match at Surakul Stadium on Saturday night, she said.