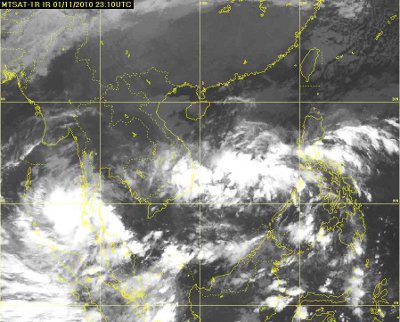 PHUKET: A tropical depression that made landfall in Songkhla yesterday is expected to bring heavy to very heavy rain to Phuket.

The latest weather advisory issued by the Southern Meteorological Center (West Coast) at 6am today said the depression was centered over Krabi province at 5am, moving westward at a speed of 15kmh.

The system is expected to pass over Krabi, Phuket and Phang Nga provinces later today, causing heavy to very heavy rains in all three provinces.

Heavy rains are already falling on the three provinces due to strong monsoonal conditions.

The Meteorological Department’s monitoring stations in Phuket Town and at Phuket Airport yesterday both recorded about 35mm of rain, bringing rainfall-to-date totals at the two locations to 1,975mm and 2,428mm, respectively

People in risk areas, along slopes near waterways and in lowlands, should beware of possible flash floods.

The system is expected to cause heavy seas as it passes into the Andaman. All ships are asked remain in port.

Flash floods have paralyzed Songkhla province, with water levels in many places more than three-meters deep.

The province has been hard hit by the depression that has resulted in consecutive days of heavy rains beginning on Friday.

Haad Yai district, the commercial hub of the province, is under three meters of water in places. Many department stores, banks and houses in the city are inundated. Authorities cut off the electricity as a precautionary measure.

In an interview with the Nation Channel, he said the flooding that came just last night has affected nearly a million people.