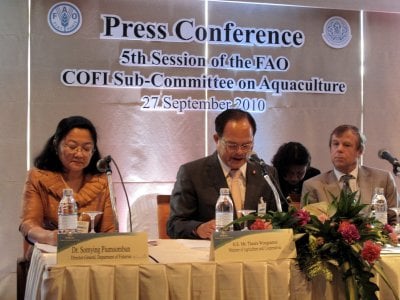 PHUKET: Hot on the heels of the Global Conference On Aquaculture 2010 held in Phuket last week, experts have stayed on for a follow-up conference hoping to hammer out an international agreement on guidelines for the fish farming industry worldwide.

The fifth session of the Sub-Committee on Aquaculture of the United Nation’s Food and Agriculture Organization (FAO) opened September 27 at the Hilton Phuket Arcadia Resort & Spa in Karon, with 60 delegates from around the world.

Theera Wongsamut,Thai Minister of Agriculture and Cooperatives, said that hosting the FAO session reaffirms to the rest of the world Thailand’s ability in sustainable aquaculture.

Thailand, one of the top five producers of farmed seafood overall, has been the world leader in shrimp exports for nearly two decades, he said.

Speaking on the Guidelines on Aquaculture Certification, Thai Department of Fisheries Director-General Dr Somying Piumsombun told the Gazette that aquaculture practices are currently overseen by a confusing patchwork of public- and private-sector organizations around the globe.

This causes confusion between international trading partners and increases costs among producers, processors and traders, she said.

“However, if, within this session, we can finally uniformly endorse the Guidelines on Aquaculture Certification [originally] discussed four years ago in the third session in India, there will be no limitations or obstacles to seafood production and trade,” she said.

There seems to be some doubt whether a “Phuket Agreement” on the global industry will be achieved, however.

Jiansan Jia, chief of Aquaculture Service at the FAO’s Fisheries and Aquaculture Department, added that the guidelines were still pending approval by the governments of some member countries.

“Since then the countries have had a lot of time to think about it and study it, and we, at this stage, do not know what the views of the different countries are,” said Kevern Cochrane, Director of the FAO’s Fisheries and Aquaculture Resources Use and Conservation Division.

“So, it would be impossible for us to anticipate what the discussion will be. We will be finding that out within the next few days,” he said.

The session closes on Friday.