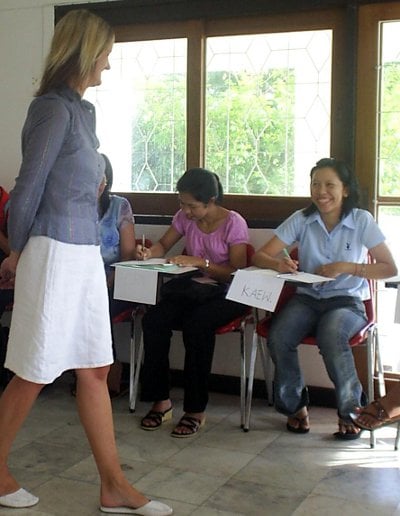 PHUKET: Thai spouses applying for visas to join or marry British partners in the UK now have to pass an English language test that is unavailable in Phuket.

“From November 29, any non-European migrant who wants to enter or remain in the UK as the partner of a British citizen or a person settled in the UK will need to show that they can speak and understand English, by taking an approved English language test,” according to an official British Embassy announcement released on Sunday.

“The new rules will apply to anyone applying as the husband, wife, civil partner, unmarried partner, same-sex partner, fiancé(e) or prospective civil partner of a UK citizen or a person settled in this country,” it read.

The tests will be mandatory for people applying from within the UK as well as visa applicants from overseas, it added.

“This new requirement was announced in June this year and as we get close to the implementation date we’d like to remind those planning on applying for a marriage visa to the UK that from November 29 they will be required to pass a compulsory English Language Test,” said Ed Mackie, UK Border Agency Regional Manager, East Asia.

“Speaking English promotes integration into British society and broadens opportunities. The new rules will help ensure that migrant spouses are able to participate in British life from the outset and integrate more easily into wider UK society,” he added.

Migrant spouses and partners will have to demonstrate English language ability at “A1” level of the Common European Framework of Reference for speaking and listening.

Applicants will be required to provide evidence with their application that they have passed an acceptable English test with one of the UK Border Agency’s approved test providers.

Details of approved English-language test providers testing at “A1 level” in Thailand can be found at: www.vfs-uk-th.com

The test centers are in Bangkok, Chiang Mai, Pattaya and Khon Kaen. There are none in southern Thailand.

Also to come into effect on November 29 are new service hours for the British Embassy Consular Section front desk, as follows:

“This change will enable us to use our staff resources more effectively, whilst retaining the same level of service for all our customers. Customers who arrive at the Embassy outside of these hours for routine consular services will not be served,” said the embassy in a release issued Saturday.

However, the statement added, “If you have an emergency within normal working hours please speak with an officer in the Consular Section available on Tel: 02-3058333 ext 2252.”