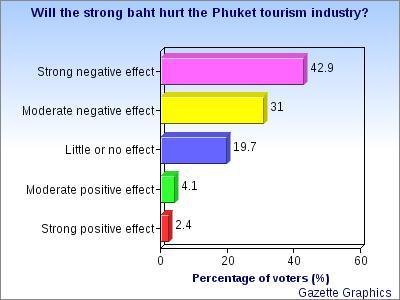 PHUKET: The surging Thai baht will have a negative affect on this year’s high season for tourism, a majority of Phuket Gazette online readers think.

With the Thai baht up more than 11% against the US dollar this year and gaining against many other foreign currencies, it is more expensive for many foreigners to travel to Thailand. What do you think the effect of the strong baht will be on the Phuket economy during the 2010-2011 high season for tourism?

Overall, 73.9% thought that the strong baht would have a negative impact.

Just 6.5% of readers thought the strong baht would help the economy.

About a fifth of those taking part (19.7%) thought the strong baht would have little or no effect.

In a demographic breakdown, participants who identified themselves as “local foreign residents” and “tourist or visitor” were far more likely to think the strong baht would keep foreign tourists away.

About half of the respondents in each group thought the surging currency would have a “strong negative effect”, the most popular response in each of these demographics.

Among Thais the most common response (43%) was that the strong baht would have little or no impact.