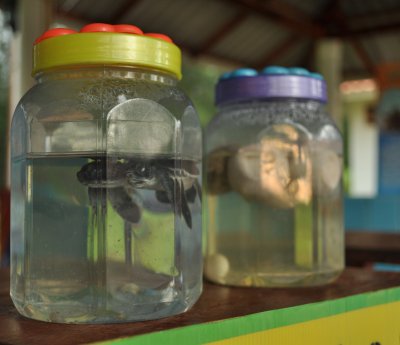 PHUKET: The two-headed Hawksbill turtle born on the Similan Islands in July died in late August at about one month of age, the Gazette has learned.

Chaloemsak Chaijit, information officer at the Royal Thai Navy base in Phang Nga, said the reptile died at about noon on August 29.

Staff at the Sea Turtle Conservation Unit there noted a lack of appetite the day before, but were nevertheless surprised at the creature’s rapid demise, he said.

When the Gazette contacted Mr Chaloemsak on August 27, the two-headed hatchling was not only healthy and gaining weight, but had also become the center’s star attraction, drawing up to fifty visitors a day.

For a PGTV video of the turtle click here.

Unfortunately the death of the baby turtle came before its gender could be established and thus be given a name, Mr Chaloemsak said.

Chadjane Chuaypetch, an officer at the conservation center, said staff there did their best to take care of the turtle, but that the nature of its abnormality was probably just too much for it to survive.

People still not aware of its passing continue to come to the center to see the turtle. They do not leave completely disappointed, however: its preserved remains are now on display in a glass jar, he said.

Survival rates among sea turtle hatchlings are notoriously low due to natural predation and man-made threats, especially the fishing industry, and the destruction of its natural habitat.

High hatchling mortality rates are factored into the species’ reproductive strategy. A healthy female can lay thousands of eggs over her lifetime, but only two of these need to survive, on average, to keep the population stable. Hawksbill turtles that do survive to adulthood can live up to 50 years of age in optimal conditions.

Unfortunately, that is not the case in the waters around Phuket. Despite efforts to increase hatchlings’ chances for survival by raising them in captivity, all sea turtle species that once nested in Phuket – once famous for its leatherback sea turtles – are now highly endangered.

Most of the sea turtles raised in captivity in Thailand are eventually released into the sea as part of dual merit-making/public awareness ceremonies on public holidays.

However, declining populations indicate the chances of survival of even these raised-in-captivity animals are almost negligible due to the threats they now face.