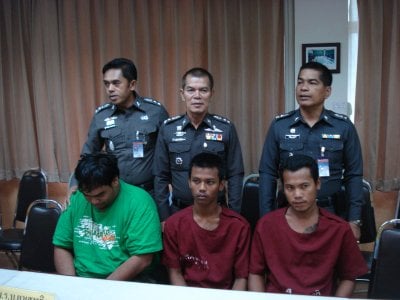 PHUKET: A 17-year-old was left dead after one man’s jealousy turned fatal in Phuket Town on Saturday night.

An accomplice identified only as ‘James’ remains at large, police said.

Mr Narongchai and Mr Kajorn were arrested yesterday morning at a house on Soi Hon Sai Thong in Rassada but James was not in the house at the time.

Shortly after 8pm on June 26, Phuket City Police responded to a call that three men had attacked and shot Mr Witarn at the Shell service station on the corner of Surin and Phang Nga roads before speeding off on a motorbike.

The victim was rushed to Vachira Phuket Hospital, where he later died.

Mr Narongchai confessed to shooting the young man because the latter had been ‘hanging out’ with his ex-girlfriend, whom he had broken up with about two months ago.

One local Thai language news website reported that when they arrived at the scene, police found a large crowd of gas station employees and locals gathered around a pool of blood.

Initial investigations showed that Mr Witarn was talking on the phone and having his motorbike filled with gas when three young men pulled up on another motorbike and parked nearby.

The three approached the young man and an altercation started and blows were exchanged. Witnesses then heard a single gunshot and saw the victim collapse to the ground, the website said.

Mr Witarn was shot in the face with a sawed-off shotgun, it was reported.