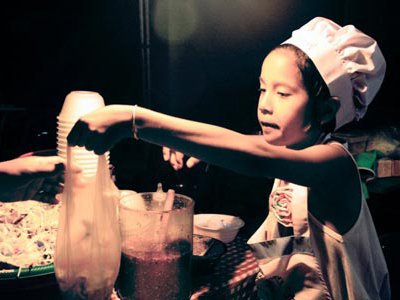 PHUKET: While many island residents partied the weekend away at the Phuket Music Festival in Karon, Kathu came to life with streetlights, red lanterns and numerous cultural activities as part of the second annual Kathu Culture Road street fair that took place on Kathu Soi 4.

Funded at about 1 million baht, the three-night fair was an attempt by Kathu Municipality to increase tourism and showcase the area’s rich history while promoting local businesses and strengthening community ties.

Participants paraded, peddled rickshaws and played music and games, all while indulging in tasty traditional food and drink.

There were also impressive exhibits of classic cars, motorbikes and musical instruments as well as live performances on a stage set up opposite Wat Kathu.

Most of the vendors were happy to welcome the handful of foreigners who attended.

Although the Phuket Vegetarian Festival is now largely centered around Chinese shrines in Phuket Town, the unique cultural event had its origins among ethnic Chinese in Kathu during the tin mining days.

Exhibits showing the way of life at the time – including opium smoking – were on display at the fair.