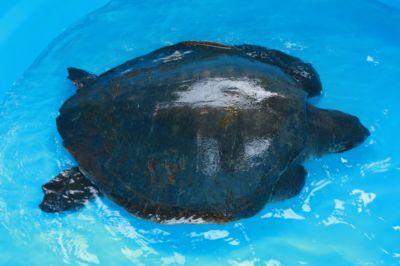 KATA, PHUKET: Two stricken turtles have been found in Phuket over the past two days.

The roughly 15-year-old female turtle’s shell had also been damaged in the incident.

“She is seriously injured and has picked up an infection now. We’ve given her vitamins, sedatives and antibiotics,” Dr Patcharaporn said.

The PMBC would need to nurse the turtle for several months before it could survive on its own in the sea again, she said.

“We see a lot of turtles injured by boats and fishing equipment. We need everyone to help us keep turtles safe by not dumping fishing nets and plastic bags in the sea,” Dr Patcharaporn added.

A second sick turtle was found on Kata Beach this morning.

Around 8am, a young green turtle around five years old and weighing 8 kilograms washed up on the beach.

The turtle had no visible injuries.

“We couldn’t find anything wrong with it on the outside, so it probably has a disease,” Dr Patcharaporn said.

The PMBC gave the turtle sedatives and antibiotics because it couldn’t swim and was hardly moving, she said.

The turtle would require a blood test and X-ray to determine what was wrong with it, she said.

So far this month more than 10 turtles have washed up on Phuket’s beaches.

The large waves common during the monsoon season mean more turtles are injured around this time of year than during other periods.

On average, the PMBC treats around 30 turtles washed up on the shores of Phuket each year, though many more will wash up but go unreported.