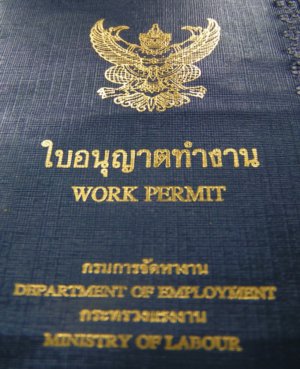 PHUKET: The Phuket Gazette has learned that recent rumors of substantial increases in work permit fees may be well-founded. Discussions are underway in the Department of Employment that could once again lead to massive hikes in these annual fees.

The current fee for a new work permit, or renewal of a one-year permit, is 3,000 baht.

The office of Thanawan Tongsukchote, head of the Phuket Provincial Employment Office, confirmed to the Gazette this morning that an increase in the fees is indeed “under consideration”. And a hike of some magnitude is a foregone conclusion as the office says it will be advising permit holders to renew their permits before September 13 when the new fees will be announced.

“We cannot yet confirm by how much the fees will be ‘adjusted’ as discussions are ongoing and a number of factors at play in the decision are still being considered,” the Office says.

The last hike in work permit fees occurred in September 2002, delivering an impressive 200% hike, an event that triggered lively and colorful comments on ThaiVisa.Com, host to Thailand’s largest English-language Web forum. Some recent comments in that forum, albeit from sources undisclosed and/or unofficial, foreshadow this month’s hike as likely to be something well over 100%.