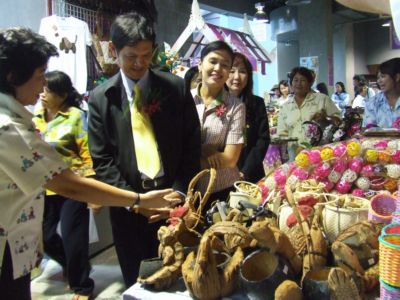 PHUKET CITY: An old Phuket hand made a welcome return to the island on Saturday when former governor Preecha Ruangjan opened a new OTOP fair at Central Festival Phuket.

The ‘All Thailand OTOP/OPOP Festival’ features products from 14 different provinces around the country.

Dr Preecha was representing Phitsanulok province, which he now governs.

Dr Preecha was governor of Phuket for less than five months, but gained widespread respect for his enthusiastic and energetic approach to the job.

The OTOP festival features around 70 different stalls selling everything from silk to spa products, to jewelery, paintings and local foods.

The opening ceremony, which took place at around 5pm, was also attended by current Vice Governors Worapoj Ratthasima and Smith Palawatvichai.

The ceremony included a performance entitled ‘Phitsanulok, the Great City’ and a fashion show.

The fair, taking place on the ground floor of Central Festival Phuket, will run until September 3.