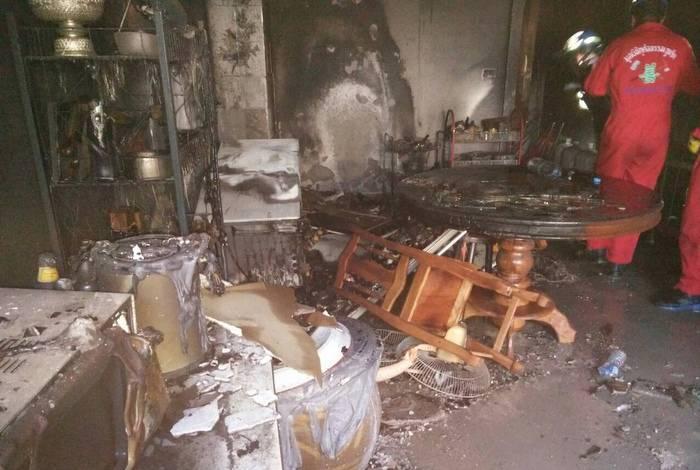 PHUKET: Firefighters from five firetrucks spent 30 minutes battling the flames from a house fire in Phuket Town, which was only one of two fires that erupted yesterday.

“The 60-year-old homeowner, Sookjai Teerapittayanon, was running errands in the neighborhood when the fire started in her kitchen,” said Phuket Provincial Police Deputy Commander Peerayuth Karajedee. “Fortunately, nobody was in the house at the time or injured while battling the flames.”

The fire, which started at about 3:30pm, completely destroyed the kitchen and caused damage to other parts of the house. Officers estimate the total amount of damage to be about 100,000 baht.

“My neighbors called me when they saw the smoke and flames, so I hurried back to see what was happening,” Ms Sookjai said. “I am so lucky I wasn’t in the house, because if I was, I might not have made it out.”

Ms Sookjai confirmed that she had unplugged all kitchen appliances that weren’t necessary to run while she was out.

“We believe it was caused by a short circuit. However, forensic police were called to the scene to determine the exact cause of the fire,” said Col Peerayuth.

That evening, enormous flames engulfed about 20 rai of land in Kathu.

The Kathu Municipality Fire Department was alerted to the grass fire near the Kathu wastewater plant at about 7:50pm.

It took more than 40 firefighters almost two hours to put out the flames.

“No injuries or damage to property have been reported,” confirmed Puchong Manavakrit the of Phuket City Municipality Fire Department.

Friday, a handicapped woman was rescued from her burning home in Rassada after locals reported hearing an explosion and seeing smoke (story here).