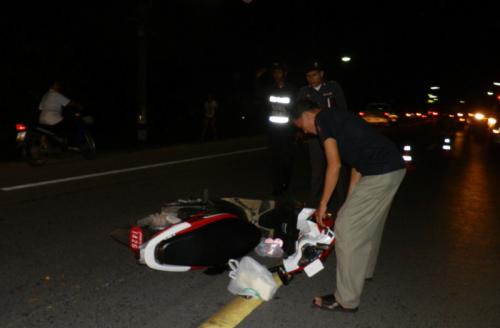 PHUKET: Police are attempting to identify a foreign man and a woman killed in a motorcycle accident in Cherng Talay, on central Phuket’s west coast, last night.

The pair were riding a motorcycle along the Cherng Talay-Baan Don Road when they were struck by a pickup truck in front of Soi Pasak 3 at about 9:15pm, Lt Col Rassada of the Cherng Talay Police confirmed.

Police found no identification on the body of either victim.

“However, we did find a receipt from a business in Karon made out to a Mr Ivan,” Col Rassada added.

The driver of the Isuzu D-Max pickup truck involved in the collision, Sompop Saelim, 29, from Phuket, told police he was driving from Baan Don toward Cherng Talay when the accident happened.

“The motorcycle came from the other side of the road. The driver lost control and the motorbike fell onto the road. I could not brake in time,” he told police.

Regardless, Col Rassada said his officers would continue their investigation into the cause of the accident.

The two deaths brings the toll on Phuket’s roads during the “Seven Days of Danger” new year road-safety campaign to five, with four more days to go.