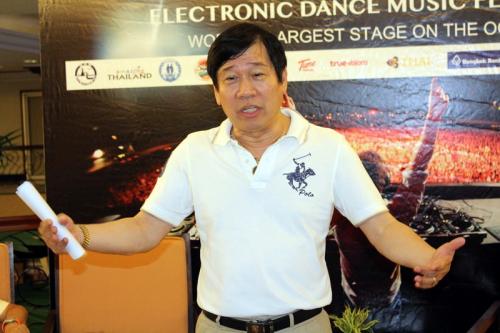 PHUKET: The Sydictive Element Phuket beach party has jumped its last bureaucratic hurdle, and with the setup for the mega-event now said to be 90 per cent complete, it’s finally “a go” for Patong Beach. However, the party organizers were handed a 15-point list of rules the party must adhere to or face the possibility of being shut down.

“We have the official documents needed to approve the party from Phuket Provincial Hall and the Phuket Marine Office. The letters were issued on December 28, so we are good to go,” Sydictive Element President Vorachart Petnunthawong said in Patong in the run-up to the event.

The list includes the prohibition of alcohol sales at the party.

In addition to that sobering necessity, the party will be limited to an 800 meter stretch of Patong Beach. Due to the event being held on public land, the organizers will not be allowed to erect any structures to separate those who have paid for “beach” tickets from those who have not.

Despite this discrepancy, Dr Vorachart assured the press that ticket sales were going well, and that the last minute change in the location from Surin Beach had not been an issue.

“We made it clear that if anyone was not satisfied with the new location, they could ask for a refund,” Dr Vorachart said.

The party starts at 3pm today and will keep the base booming until 6am tomorrow. Then after a little “down time”, the party will pick up the pace again at 3pm tomorrow and run until about an hour before the first rays of the new year’s sun hit Phuket.

“There will be 15 world-class DJs in attendance and another 15 Thai DJs, as well as many other bands and musicians,” he said.

“However, we have yet to be able to confirm whether Paris Hilton will join the party,” he added.

But Glenn “GG” Gulino, Esq of g2 Entertainment had earlier this month written to the Phuket Gazette that, “Your rights to use her [Paris Hilton’s] name ended weeks ago and since you cancelled her NYE [New Year’s Eve] appearance you cannot use her name. Thank you.”

However, as the Gazette had at no time invited or cancelled Ms Hilton’s attendance at the party, or been involved with the event in any capacity other than reporting on it, Gazette editors were left to believe that the email was meant to be sent to the party organizers.

1. The party is allowed to be held only on an area of Patong Beach that does not stretch further than 800 meters.

2. The party area cannot be separated from the general public.

3. The party must strictly adhere to local laws, and because of this will be unable to sell alcohol.

4. The event must not threaten the traditions and moral standards of local people.

5. There must be a high-level of security with ample personnel.

6. The organizer must keep the beach clean and pay the trash collecting fees.

7. The two VIP boats must not contain more than 240 people.

8. The boats must have railings to prevent people from falling overboard, except for the entrance to the boat, which must have a proper door.

9. Enough life jackets and life buoys for every passenger must be on board the VIP boats.

11. Security must be provided around the perimeter of the VIP boats to save anyone who falls overboard.

12. At least two patrol vessels must be provided by the organizers.

13. Organizers must provide rubbish bins on the boat and prevent any trash from being thrown into the sea.

14. The organizers must agree that if any trouble or issues arise the party must be shut down.

15. The organizers must have “group insurance” for the event.