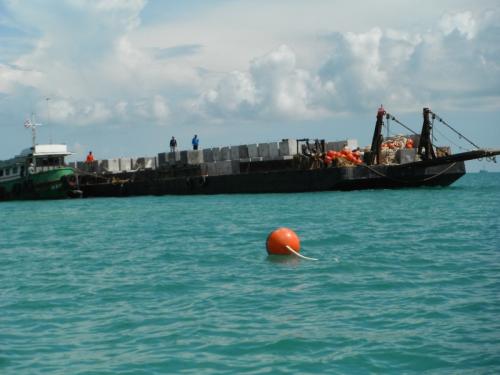 The broken lines have sent the yachts and other vessels to smash against their neighbors in the bay, resulting in complaints to the Phuket Gazette, with one skipper reporting four incidents on December 22 alone.

The news came after a 40-foot yacht, Jenzminc VI, broke free after it had been tied to one of the new moorings for about five days. The mooring line frayed and the boat collided with another yacht, sustaining damage.

The line was attached to one of 200 moorings laid by the Marine Department on November 29 in a project costing 5.8 million baht. The effort was undertaken to protect coral reefs from anchor damage.

But despite the carnage, Phuket Marine Chief Phuripat Theerakulpisut says the moorings are safe.

“We checked them before we made them available to the boat owners to use,” he said.

Chief Phuripat believes that the fraying lines may belong to moorings set and rented out illegally by local people.

“We are trying to verify this, and if we find the people, they will absolutely be prosecuted,” he says.

Nevertheless, he planned to immediately re-check the lines set by the department for which he is responsible.

Local yachties also said that the lines were strong enough. However, they blame the fraying on the direct attachment to the 2.5 ton concrete moorings. Without intermediary swivel systems that reduce friction, too much stress is placed on the ropes and they can chafe through.

Yachties voiced other concerns about the new moorings, notably that some of them were located too close to existing ones, risking collisions with the nearby vessels. One boat owner had his rudder torn off and a hole punched in the hull of his boat, costing about 30,000 baht in repairs and a further 25,000 baht in lost income from a cancelled day trip.

“Another 40-foot yacht [not the Jenzminc VI], this one owned by a Brit, was tied to one of the new moorings for six days,” a yachtsman told the Gazette.

“The owner thought everything was fine, until he came back from shopping to find a big dive boat bashing against his yacht. The mooring for the big dive boat was laid by the dive company some years back, and the new mooring was laid too close,” he explained.

Another concern is that some of the new moorings are posing a hazard at low tide.

“Some of the mooring blocks have been dropped in the shallower water, not far from the pier. There are some shallow patches that most boats avoid at certain tides,” another yacht owner told the Gazette.

“When the tide is low, the concrete blocks become navigation hazards, reducing the depth even more and replacing a soft muddy bottom with a solid concrete one,” he added.