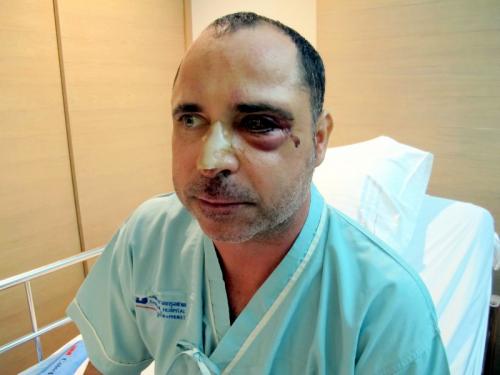 PHUKET: Two out of the four Russian men who allegedly led an unprovoked attack on a well-known local couple at Catch Beach Club on Surin Beach have been charged with assault.

Phuket Police are still searching for the two other men.

Canadian Tom Travers, managing partner of Indigo Real Estate agency, was beaten unconscious and had his cheekbone broken in three places during the attack.

His girlfriend Jen Khamsorn suffered a broken nose when she was punched in the face.

Staff at the hotel, which the couple visits about once a week, explained to them that no CCTV footage exists of the altercation, because it happened in a blind spot.

Both have undergone corrective surgery at Bangkok Hospital Phuket.

“It was about 2:30am, when we were getting ready to leave the club… There were some guys hanging around. One of the guys was walking around the area with no shirt on. We had a feeling there was going to be trouble, so we wanted to get out of there,” Mr Travers told the Phuket Gazette on Wednesday.

“Jen paid the bill and we were about to leave, when I noticed one of the guys walked up to her. It looked like he was about to cause trouble. I stepped in front of her, trying to get her out of the area. Suddenly the man punched over my shoulder and hit Jen in the face,” he said.

Mr Travers had no idea why the men started attacking Ms Jen.

“I tried to stop them, but they all jumped on top of me and started to punch me. They knocked me to the ground and then kept beating me,” he explained.

“I’m so thankful for the staff at Catch for helping [me], because if they hadn’t, I did not know when the men would have stopped beating me,” he added.

Allegations have arisen that Ms Jen may have instigated the confrontation, though Mr Travers told the Gazette she only left his side that night when she went to pay a bar tab, “which only took about 30 seconds”.

“I did not hit them with the water bottle [as was alleged in the media],” Ms Jen told the Gazette. “That night I didn’t even drink water. How could I have a water bottle? I was with Tom the whole time and we weren’t anywhere close to those men, how could I attack him first?”

Both Ms Jen and Mr Travers recalled that one of the Russian men who assaulted them had gotten into an argument with a British man earlier in the evening.

“Before we left, I saw Tom went to off to say ‘hi’ to the British man and who had been in an argument with the Russians. After I finished paying our bill I walked back to Tom and told him it was time to go home – that’s when the man punched me in the face,” she said.

Ms Jen explained to the Gazette that a friend of the Russian men came to the police station to talk with her and negotiate the situation.

“He tried to compromise, but I didn’t listen to him,” she said.