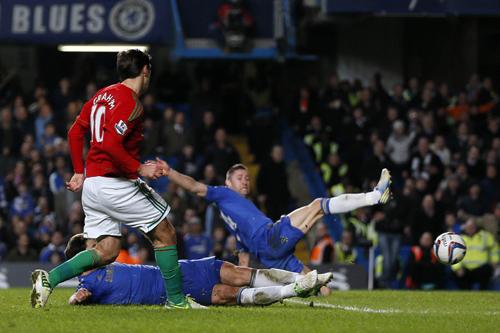 Michael Laudrup’s Swansea, playing in their first major semi-final for 49 years, weathered an early storm from the European champions before scoring against the run of play in the 39th minute.

Branislav Ivanovic blundered after receiving a pass from goalkeeper Ross Turnbull and Jonathan De Guzman robbed the Chelsea defender on the edge of the box before setting up Michu for a curling left-foot finish.

It was the Spaniard’s 16th goal of the season in all competitions and substitute Graham delivered a sucker-punch second goal near the end.

“Winning an away game against the European champions is obviously very special,” Laudrup told Sky Sports.

“We knew it would be a very difficult game, we had to defend a lot more than we are used to. They had a lot more possession than we had.”

Juan Mata and Ramires shot weakly when well placed while Gary Cahill headed narrowly over from a corner.

Acrobatic save
Swansea then struck completely against the run of play through Michu before Ivanovic tried to make amends for his error when his rasping 20-metre shot was saved acrobatically by Gerhard Tremmel.

The home fans became agitated in the second half as four-times League Cup winners Chelsea struggled to create clear-cut openings, calling for substitutes Frank Lampard and Demba Ba to come on.

Swansea then delivered a second goal in stoppage time when substitute Graham rounded Turnbull before sliding the ball into an empty net.

Ba, bought from Newcastle United last week, had the ball in the net in the closing stages but it was chalked off.

“We had chances, the team had chances and we have to take our chances,” Chelsea’s interim manager Rafael Benitez said.

“It’s a Cup competition and we can score goals, if we score a goal everything will change,” he added in reference to the second leg.

Swansea captain Ashley Williams, named man of the match for a towering display in defence, said: “The second goal gives us little bit of a cushion but we know they are going to come at us with everything at our place.

“I said to the guys before that this was the game of our lives. We are halfway there…and if we do get to the final at Wembley it will be massive for everyone.”

It was the second surprise result in successive days in the League Cup, fourth tier Bradford City having beaten Premier League Aston Villa 3-1 in their first leg on Tuesday.

Both second legs are in two weeks’ time.

Live Wire – Help! my email is not sending