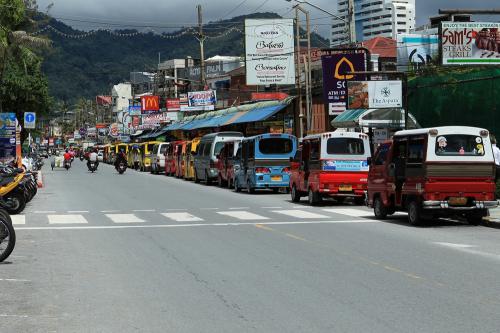 PHUKET: As the clock starts to tick down on a plan to evict tuk-tuk drivers from parking spots in Patong, response from tuk-tuk drivers varies from flat refusal to requests for fairness in the application of the new measure.

“Most tuk-tuk drivers will not agree to move off the road. Where would we work then?” said Sakol Srisompoch, who earlier this year led a group of tuk-tuk drivers to file a complaint to Phuket Governor Maitri Inthusut about illegal tuk-tuks drivers (story here).

“Police should focus on arresting illegal tuk-tuk operators, not us,” he said.

“From what I’ve heard, a lot of people are not willing to move from their parking spots. We will wait and see what the order is,” he said.

However, not all drivers are taking strong stances against the new policy.

“I don’ t have a problem obeying whatever is agreed on,” said one tuk-tuk driver who declined to give his name. “As long as it’s fair, I’m willing to adjust to the rules.”

“But police need to talk to rental bike stations and illegal taxis too,” he said. “The cops also need to have a way to make sure black plate taxis aren’t stealing the spots.”

President of the Patong Taxi Association Settasak Buason believes that police should call in every tuk-tuk driver who works on the Patong beachfront road.

“It’s not enough just to talk to the heads of the tuk-tuk stands,” he said.

Mr Settasak said he hoped for a peaceful resolution, adding, “I hope police can find a solution that meets the drivers halfway.”

“Most of the tuk-tuk drivers on the beach road have been there for a long time. They manage the parking by themselves,” he noted.

Patong Police Inspector Ekkarat Plaiduang noted that tuk-tuk drivers who have been using the same spot for over 20 years may feel like they own them.

“Right now we are still in the discussion phase,” he said, noting that the process cannot go forward until Phuket Provincial Police Commander Ong-art Phiwruangnont issues the order to do so.

Former Phuket Governor Tri Augkaradacha also tried to coax tuk-tuk drivers out of parking spots in Patong in early 2011 (story here). His plan would have opened about 60 per cent of the parking places on the beachfront road, leaving the remainder for tuk-tuk and taxi drivers.

Under those rules, rental operators were allowed to park only one car and four motorbikes in each of their allotted spaces between 7am and 5pm. After 5pm the parking spots were to be opened to the public.

Maj Gen Ong-art’s scheme is expected to be unveiled within two weeks.