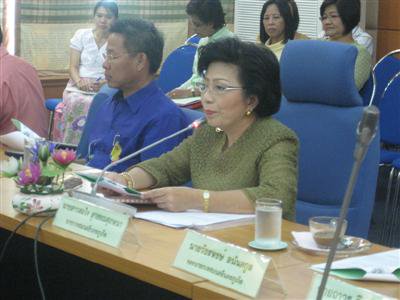 Funding is being sought from the Ministry of Finance under the central government’s Thai Khem Kaeng (Strong Thailand) national development scheme.

Mayor Somjai said the funding request is in line with plans to develop Phuket into a world-class sports tourism destination.

She stressed that a new stadium is also needed for domestic tourism as Phuket prepares to host the 25th Annual National Youth Games in 2012.

The existing indoor stadium at Saphan Hin lacks air-conditioning and has seating for just 500 people and is thus inadequate to host national- or world-class sporting events, she said.

The new stadium would be air-conditioned, with 4,000 seats and would be built to Sports Authority of Thailand standards to host major competitions, she said.

The city’s planning department is currently working on the design and once that is complete, construction of the stadium would put up for bidding.

The winning contractor would have until the end of 2011 to complete the work, she said.

If it moves forward, the project might take some momentum out of the plan to build an international-class sport complex in Mai Khao, an idea originally championed by former Phuket Governor Udomsak Uswarangkura.

Many have complained that the proposed site of that project, on Treasury Department land and the northern tip of the island, is too distant from the island’s main population center in the south. However, the current government continues to move forward with plans to build an international conference and exhibition center nearby.

On any given day, anywhere from 1,200 to 1,500 people come to Saphan Hin to exercise at the numerous sporting facilities already there, Mayor Somjai said.