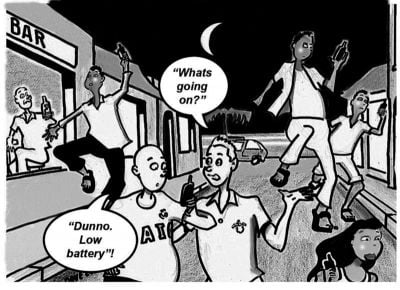 PHUKET OPINION: The confusion following the 7.8 magnitude earthquake in northern Sumatra last month highlights the urgent need for better disaster preparedness at every level in Thailand, from the people at the National Disaster Warning Center (NDWC) right on down to local Phuket officials and hotel staff.

The latest (April 7) false alarm was not the first. The public panic that ensued following the quake was considerably less than on the night of March 28, 2005 when a much more powerful 8.3 quake off the coast of Sumatra also failed to produce a tsunami.

As for the April 7 false alarm, neither the NDWC nor the Department of Disaster Prevention and Mitigation (DDPM) have yet to issue a definitive statement explaining why an evacuation order was issued via SMS, but without sounding tsunami warning towers in risk areas like Phuket. [See story, page 5 of the current issue of the Phuket Gazette. Web subscribers click here to download.]

Efforts by the Gazette to clarify what went wrong that morning have yielded circumlocution and contradictory statements, suggesting confusion and real gaps in the safety net.

High-ranking staff at the NDWC said the decision not to sound the sirens was based on a real-time review of seismic data and monitoring of the tsunami direct detection buoy northwest of Phuket.

However, a member of the regional DDPM office here in Phuket later confirmed that an evacuation order had been issued by SMS, although not one for a ‘full level three’ evacuation that requires ‘immediate’ flight without giving evacuees time to collect valuables.

Obviously, much needs to be done, but a good first step for the NDWC would be to put more effort into the website it launched last year at https://www.ndwc.go.th

A quick review of the site, where English is available, shows that upgrading content has not been a focus of NDWC efforts this year. But of course the NDWC is not the only government agency in Thailand with an embarrassing Internet presence. Indeed, the Gazette is aware of comment areas on some government sites which are so poorly administered that they contain little more than spam links to pornography.

Let’s hope they also invest more resources to ensure that the public can access real time information about potential tsunami threats that go beyond the 160 character limit of a standard SMS message.

Thai airways in U-turn over Phuket?